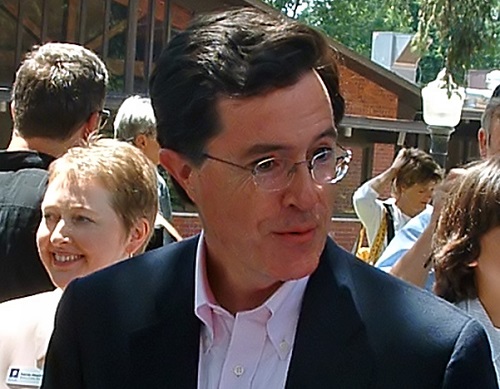 In a refreshing act of a deep-pocketed donor giving local change makers on the front lines what they say they need, Stephen Colbert announced yesterday he would fund every grant request the South Carolina public school teachers had made on the education crowdfunding site, DonorsChoose.org. That’s right, every request from each teacher in the entire state, totaling almost a thousand grants and $800,000.

Colbert’s donation is coming from the proceeds of auctioning off the old set of The Colbert Report. Colbert, a South Carolina native who went through the public school system himself, has partnered with the Morgridge Family Foundation’s Share Fair Nation and ScanSource, a supplier of specialty technology products, who will be matching his donation.

“Enjoy your learning, South Carolina,” said Colbert during the announcement.

The announcement was telecasted on a live video feed at Alexander Elementary School in Greenville, and was attended by many state and local school officials. “There are going to be some happy, happy teachers across the state,” said state schools superintendent Molly Spearman. “This is Teacher Appreciation Week, so what a great way to say ‘thank you teachers for what you’re doing every day.’”

On DonorsChoose.org, teachers are able to create projects and request funding for materials or even specific experiences for their students, like speakers for the class. One of the partners of the initiative, ScanSource, helped bring the nonprofit crowdfunding site to South Carolina back in 2005, and since then the state has seen 13,000 projects worth over $5.6 million be funded. Donors are able to navigate based on subjects and fund the projects. The funded grants are going to coverage for anything from school supplies to further educational opportunities for teachers. Here is a complete list of the projects that were funded.

“I think it’s generally extra things, but to be honest with you, in some situations it could be basic-type things that the students need where the district just hasn’t been able to fund it,” Spearman said.

Beth Bailey, the librarian at Alexander Elementary, was given a box of books for a girls reading group she was intending on initiating. “These girls, they’ve been asking for this one for weeks,” she said, holding up a paperback. “To have this in our library is huge and it’s just promoting reading in so many ways. We’re so grateful.”

According to Christy Thompson, the vice president for worldwide marketing for ScanSource, “Teachers have the responsibility of going online, starting their projects and asking for funding, but it’s really everybody’s responsibility to go and look at those projects and help fund, so today is about that as well.”

For NPQ, this is a great example of giving with respect.—Shafaq Hasan