Colo. Students and Teachers Walk Out after Attempt to Neuter History 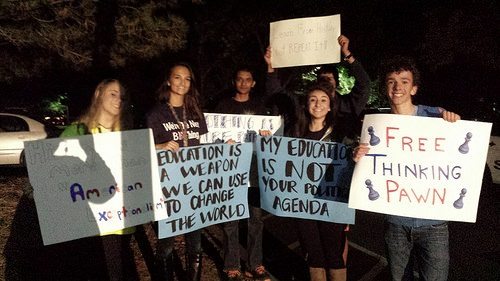 At all 17 schools in Jefferson County, Colorado, demonstrations have been staged in response to an attempt by the Board of Education to redraft the history curriculum in advanced placement courses in order to ensure that all materials “promote citizenship, patriotism, essentials and benefits of the free-market system, respect for authority and respect for individual rights” and don’t “encourage or condone civil disorder, social strife or disregard of the law.”

This has, somewhat ironically, created a kind of project-based lab for civil disobedience that extends far beyond the advanced placement classes. Students and teachers alike have staged walkouts, sick-ins, and demonstrations, thus getting the attention of national advocacy groups who have taken up their cause in support.

“Mostly I’m learning how people need to act to make a democracy function. The school board got elected because they misrepresented themselves and only about 40 percent of registered voters turned up for the election. It’s a failure on the part of the electorate that we failed to educate ourselves about the government. These protests though are showing those of us participating that, if we want democracy to work and our government to represent us, we need to take an active role in it.”

His mother, Barbara, chimed in with, “He and his friends have taken the AP history class and have firsthand knowledge of what is taught. Like I said, I am very proud and think that having young people involved in their community and to feel strongly about education and teachers is a positive thing.”

Somewhat predictably, the school board has claimed that the students are being used as pawns by the teachers.—Ruth McCambridge