Community Engagement in Public Schools and How Not to Do It 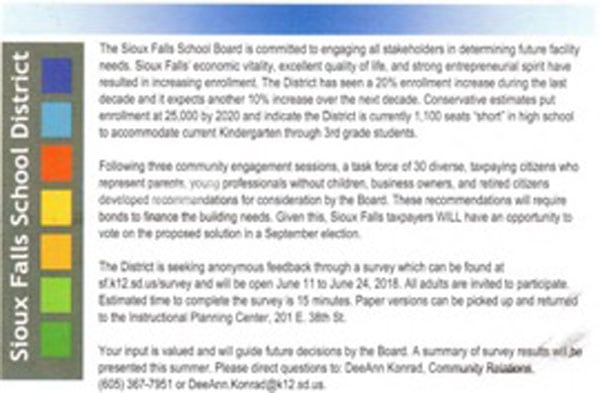 Community engagement provides the opportunity to open dialogue and hear different voices. Especially if you’re a governmental entity, bureaucratic invitations and biased polling is no way to engender trust in the process.

The Sioux Falls school district is facing the problems of prosperity and growth. The school district population is growing, especially at the fringes of the city where newer neighborhoods are being built to accommodate up to 3,500 new residents annually. The district’s student population is becoming more racially and ethnically diverse, and its programming options are becoming more specialized as the needs of the community expand.

Faced with the need to repair and expand existing facilities as well as build three new schools, plus a proposal for $40 million in equity projects, the district is preparing to authorize a public vote to approve a $190 million bond issue to finance the projects. If passed, the bond issue is expected to add about $25 a year to the average homeowner’s property taxes for the next 25 years.

Sensitive to the perpetual unpopularity of tax increases, the school district has been working on ideas for well over a year, including convening a 30-member facilities task force of community leaders, parents, and others to hear presentations and influence the process. The task force presented its report, and now the school district is asking for residents to participate in an online survey. The survey process is where the breakdown in community engagement begins.

First, residents (the addressee was “Resident”) were mailed a standard postcard with very small print and no clear headline or “call to action.” Second, the survey itself began with demographic questions (usually reserved for the end of surveys) and proceeded to questions containing paragraphs-long information about the proposed bond issue and asking, in effect, “If this is the right thing to do, would you do it?”

Significantly, for a poll at the beginning of a broad-based community-wide engagement strategy, there was no option for respondents to indicate they were undecided or not sure whether they would support the initiatives being proposed. Most questions required a response, so there was almost no option to leave a particular question unanswered.

The closed and bureaucratic approach to garnering support for initiatives promoted as benefitting the community as a whole may have the opposite of the intended effect. There are reports that an independent group may be formed to support the bond issue. Perhaps they’ll do a better job of engaging the community.—Michael Wyland