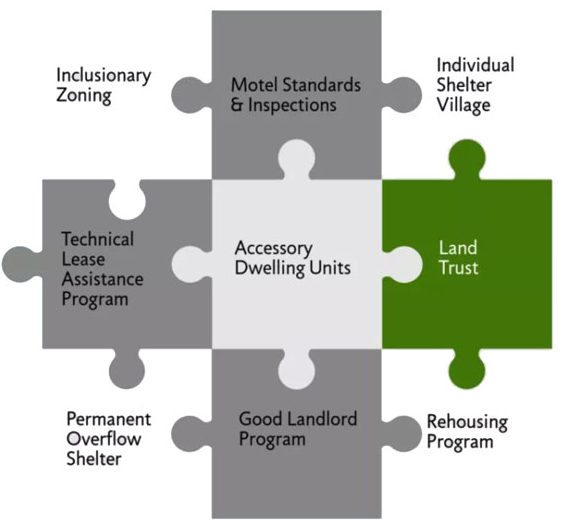 In what is being described as a new model to address homelessness, a community land trust (CLT) has been granted a plot of land in Reno, Nevada, for the express purpose of developing housing for the working poor, homeless teens, and older adults without permanent housing.

On April 20th of this year, the Community Foundation of Western Nevada established the Community Housing Land Trust, culminating a few years of work on issues of affordable housing in that part of the state. A few days later, they went before the Reno City Council and asked for the right to purchase a city-owned property on Sage Street for $1. It was unanimously approved.

As NPQ has covered in the past, CLTs enable nonprofits to hold land in trust and keep it off the commercial real estate market. In many instances, CLTs support affordable housing by having the land purchased and owned by the trust while the housing on it is owned at lower expense by the resident. This is seen as a way to help people with modest income to get housing while beginning to build equity. In other cases, as in Washington, DC, CLTs are used to preserve land that might otherwise become victim of gentrification, pushing current residents who cannot afford higher rents or property taxes to leave.

The Reno model is unique in that it will be the site of 200 rental units with the express purpose of providing transitional housing for the formerly homeless. They are projected to be dorm units, or very small living spaces with shared bathrooms, a gym, laundry facility and other communal amenities. The units will be prefabricated and will carry a total cost of $1.9 million—i.e., under $10,000 per unit. The Foundation has committed to raising the money. If the money is not raised in a timely fashion, the land will revert back to the city.

The units are projected to rent for less than $400 a month. Renters will have to meet very specific qualifications such as proving that they either are minimum wage workers, participate in a program serving teens, or older adults who have been displaced from motels where they had been staying. The goal is to provide interim housing between a shelter and more permanent solutions.

Several people on the City Council are quoted in support of the project. One Councilperson has been working on a tiny housing solution for some time and sees this as an opportunity that can be completed more quickly. Another chides his fellow legislators for taking so long to come up with their own solution to the affordable housing crisis while applauding the Community Foundation.

The CEO of the Community Foundation, Chris Askin, believes because the effort is a nontraditional approach, it will require a significant donation of funds, services, and materials. However, he says it could be a model for the nation.—Rob Meiksins