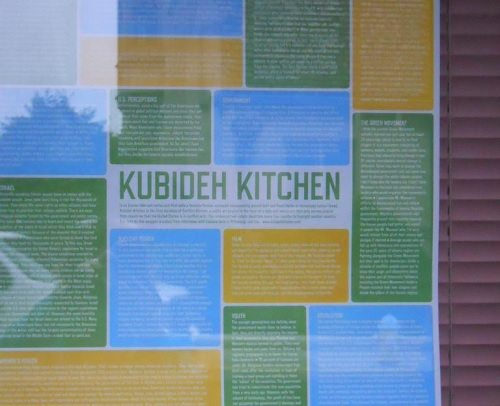 A small effort to engage the Pittsburgh community in sensitive issues raised by areas of international conflict has spotlighted the challenge of philanthropic support for controversial material and organizations.

The Conflict Kitchen was launched in 2010 by Carnegie Mellon University art professor Jon Rubin and Pittsburgh artist Dawn Weleski. Its stated purpose is to “use the social relations of food and economic exchange to engage the general public in discussions about countries, cultures, and people that they might know little about outside of the polarizing rhetoric of governmental politics and the narrow lens of media headlines.”

When the Conflict Kitchen chose Palestine as its focus for this fall, it brought down upon itself a torrent of local, national, and international opposition. Using the medium of food, Conflict Kitchen seeks to engage its community in an exploration of areas where the United States finds itself embroiled in conflict. Its menu, the information printed on its food wrappers, and the presenters it invites to speak at events frame the conflict and hopefully build greater understanding. Those who challenge Conflict Kitchen say it presents only Palestinian voices and gives a distorted perspective.

In a blog post by Jon Rubin, Conflict Kitchen’s leadership responded to the controversy:

“Conflict Kitchen’s goal is to increase the curiosity and understanding about the people who live in countries our government is in conflict with by directly exposing our customers to these cultures and viewpoints. Another goal is to raise the public profile of the minority Afghan, Iranian, Cuban, Venezuelan (previous conflicts explored), and Palestinian communities who live and work in our region, thereby creating a more accurate depiction of Pittsburgh’s cultural diversity.”

Gregg Roman, director of Community Relations Council at the Jewish Federation of Greater Pittsburgh, said, “Conflict Kitchen’s focus on countries in conflict is honorable, but Palestine is not in conflict with the U.S. The restaurant is stirring up conflict for the sake of trying to be relevant.”

John M. Ellis, senior director of communications with the Heinz Endowments, recognized that the issue raised by the protesters raises a wider concern for the integrity of arts and the role of funders who support the arts. “There is another major issue at stake here concerning the rights of arts organizations to perform edgy and provocative programming,” he said. “That, in many ways, is the role of the arts, and while we may not always agree with the positions and opinions they express, we do support their right to express them.”

The controversy hit a new level over the weekend when local authorities received death threats against the café’s founders; the café suspended operations while the Pittsburgh police completed their investigation, but will reopen today.—Marty Levine