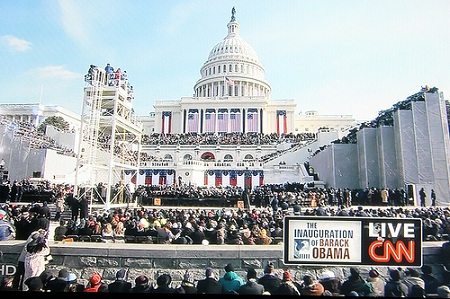 It seems that the president’s corporate resolve is wavering. Politico suggests that the president’s team may be concerned that they can’t go back to individual donors who may be tapped out after generating more than a billion dollars for his campaign. To raise enough money for a second inauguration, an anonymous aide told Politico, is too difficult without opening up the process to corporate donors. They also justified corporate donations for the inauguration as equivalent to giving to support a civic event like the Cherry Blossom Festival—although that doesn’t explain why the administration rejected corporate donations four years ago.

Politico notes that the president has changed his position on contributions before. For example, he switched this year and accepted large donations from PACs after strong statements against PAC funding, and he even turned a blind eye to Democratic 501(c)(4) social welfare organizations and super PACs channeling the unlimited corporate money unleashed by the Supreme Court’s Citizens United decision. Similarly, given his access to huge levels of campaigns donations, the president spurned public campaign financing and the limitations that required.

The Obama administration’s conditions for the inauguration corporate largesse are as follows:

No donations that might cause conflicts of interest, such as those from corporations looking for big federal contracts or owing stimulus money. Does that mean that the banks and auto companies that still owe money for the bailout won’t be able to contribute? What about corporations that aren’t looking for federal contracts but for much more lucrative tax subsidies? Will they be allowed into the money game?

No donations from lobbyists or PACs. So that means that Brownstein, Hyatt, Farber & Schreck won’t be able to contribute, but one of its top clients, Caesar’s Entertainment, can; the bipartisan Quinn Gillespie & Associates can’t, but Qualcomm can; Ernst & Young can’t, but corporate client General Electric can; Cassidy & Associates can’t, but MGM Resorts can.

No corporate naming sponsorships or branding allowed. It’s a relief not to have to worry about seeing a pitch for “the GoDaddy.com Presidential Inauguration.” However, Politico reports that there will be “packages” of sponsorships, probably enabling the contributing corporations to get tickets to inauguration after-events. The face-time that will buy with politicians may be worth more than the donations.

Though required by law to disclose donors to the Federal Election Commission after the election, the administration will voluntarily disclose them beforehand. We will be eager to see if the list includes banks that have repaid their TARP bailouts, the Wall Street firms that were banking on the president’s opposition during the campaign, or the oil companies resisting pressures to give up subsidies that many critics consider unnecessary.

Robert Weissman, the head of Public Citizen, wrote to President Obama last month, when rumors of a possible change in the president’s position on corporate donations began to emerge, stating, “When the American people watch you take the oath of office, they should not wonder if you are also obligated to corporate donors.” Looks like they’ll get to wonder, this time around, about how much horse-trading goes on between the corporations and the president’s advisors and aides.

The irony of it all is that the kick-off for the inauguration is a day of service keyed to Dr. Martin Luther King Jr.’s birthday. The president, Vice President Biden, and others will be volunteering without expectation of recompense. The corporations will be contributing big dollars to the inauguration, but if you think it’s from the goodness of their voluntary hearts, you might want to check your wallet.—Rick Cohen