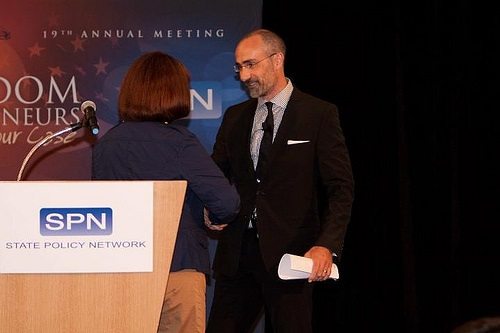 November, 2013; Progress Now and the Center for Media and Democracy

Some years ago, in a study of foundation support for school privatization, we noted the multiplicity of state-level conservative “think tanks” supporting a pretty consistent state-to-state agenda, achieving widespread success in pushing for vouchers, corporate tax credits for private schools, and charter schools. We documented the grantmaking to these state think tanks, highlighting the significant role of the Roe Foundation based in South Carolina.

Yesterday, Progress Now and the Center for Media and Democracy released a hard-hitting study about 63 state-level conservative think tanks that are members of the State Policy Network. Founded in 1991 and incorporated in 1992, SPN’s founding board chair was in fact Thomas Roe himself. From 13 member think tanks at its founding, SPN now has think tanks operating in all 50 states. Based on a suggestion from Ronald Reagan that he try to create a Heritage Foundation in every state, Roe’s animating idea was that state level policy think tanks would capture the attention of state policy makers.

It was smart thinking. As Gordon Lafer, a professor at the University of Oregon, noted during a press briefing organized by the two sponsors of the study, many state legislators are “thinly staffed” and therefore look to outside experts for frameworks and suggestions. These conservative state think tanks give legislators detailed analyses and model legislation addressing business issues (such as deregulation, right to work, and low minimum wages), healthcare (actively opposing state-level implementation and collaboration with the Affordable Care Act), and state taxes (reduced tax rates for corporations and for the wealthy)—though much of the model legislation comes ready-made from SPN’s association with the American Legislative Exchange Council (ALEC), known for its advocacy of pro-business legislation as well as restrictive voting rights bills and stand-your-ground statutes.

The study suggests that the State Policy Network has grown into a well-funded system of state-level advocates, whose combined revenues in 2011 exceeded $83 million. Twenty-two of the SPN think tanks are either members of ALEC or sit on ALEC task forces that generate the model bills frequently introduced in state legislatures. Thirty-four SPN members have “direct ties” to ALEC, and SPN itself is a member of ALEC. Like ALEC, SPN and many of its state think tank members, such as Arizona’s Goldwater Institute, are 501(c)(3) public charities and claim to do no lobbying, though some of the 501(c)(3) think tanks have 501(c)(4) arms. One clear demand from Brian Rothenberg, the executive director of ProgressOhio, a member of Progress Now, is that these lobbying think tanks, like the Buckeye Institute in his state, should register accurately and fully as lobbyists and comply with the reporting and transparency required of lobbyists.

As a 501(c)(3), the State Policy Network gets to keep its donors’ names and donation amounts confidential for the most part, but Progress Now and the Center uncovered a document that revealed a variety of corporate donors to SPN and also generated a list of sponsors of SPN’s most recent national gathering. While the study underscores the presence of the Koch brothers as funders of SPN and ALEC, the corporate support of SPN is noteworthy, especially with the appearance of some surprising names.

It’s no surprise to see the tobacco companies among SPN donors, but the appearance of Microsoft and Facebook is unexpected, particularly as Microsoft has occasionally strayed toward conservative donations, such as the seven-figure gift from the Bill & Melinda Gates Foundation while Bill was still at Microsoft to the Discovery Institute and to the DeLay Foundation, but then made efforts to narrow its relationship with them or disengage entirely. Facebook has seemed to craft an image of being a relatively progressive corporation, though that’s changed with revelations that founder Mark Zuckerberg has supported conservative-leaning issues and, in the case of New Jersey’s Republican governor, politicians. Protected from disclosure due to its 501(c)(3) status, SPN doesn’t have to reveal these corporate donors, and Lisa Graves, the executive director of the Center for Media and Democracy, did not advocate that these groups be compelled to disclose. Rather, in the press call, she suggested that SPN and its member think tanks be encouraged to “self-disclose” their funding and, agreeing with Rothenberg, register as lobbyists with the enhanced disclosure requirements that come with that status.

The fundamental issue implied by the study is whether these independently incorporated 501(c)(3) members of the State Policy Network—and the SPN itself—are truly independent, or actually little more than fronts for corporate interests, promoting policies that explicitly benefit their corporate funders on their bottom lines. Through disclosed and undisclosed corporate donations directly to SPN and its members, and potentially through donations to and through funds like the Donors Trust and the Donors Capital Fund (donor-advised fund managers linked to the Philanthropy Roundtable, with the Capital Fund managing individual funds of no less than $1 million apiece, chaired by the Roundtable’s Adam Meyerson) and even more secretive entities called the “State Think Tank Fund” and the “Government Transparency Fund,” the State Policy Network and its members could well be explicitly promoting the business interests of specific corporate funders. Without disclosure, how is it possible to know?

If SPN, its members, and ALEC are engaged in lobbying, as they most certainly seem to be, they should acknowledge it, comply with the rules, and obey the limitations applicable to 501(c)(3) public charities, or admit that they are really 501(c)(4)s and reorganize as such. If SPN, its members, and ALEC are significantly funded by corporate players that specifically benefit from the policies and legislation they promote, those funding relationships should be disclosed to the public, so that American voters know who or what is providing policy ideas to state legislators. The authors of the study shied away from advocating change to the disclosure requirements on 501(c)(3)s, noting as Ohio’s Rothenberg did, that even some of ProgressOhio’s large funders requested confidentiality for their donations.

It may be time to revive an old idea that was often resisted by nonprofits in years past, including national leadership groups such as the Council on Foundations and Independent Sector, that all corporate charitable donations, whether through corporate foundations or directly from corporate officers, be publicly disclosed. Waiting for self-disclosure is going to be a long and fruitless wait. Mandating corporate disclosure—not just to the public, but to corporate shareholders—would go a long way in revealing how corporate money is pulling the strings of many ostensibly nonpartisan public policy think tanks. Otherwise, unless groups like Progress Now and the Center for Media and Democracy happen to stumble on errant SPN funder listings, the public will never know whether or which corporate treasuries are manipulating the democratic process.—Rick Cohen