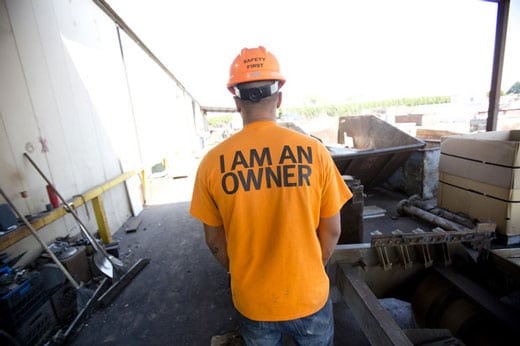 An article by Peter Walsh, Michael Peck, and Ibon Zugasti in the Harvard Business Review calls for the “use of worker buyouts, in which ownership of a company transfers from a single person or a small number of people to the workers of the company” as a means to reduce wealth inequality.

The call itself is not unusual. NPQ itself has written widely on employee ownership as a tool for business succession as the Baby Boom generation reaches retirement, as well as on the broader need to rebuild a more just and equitable economy.

As the authors note, employee ownership is already a proven strategy. Both farmer-owned cooperatives—e.g., Land O’Lakes and Ocean Spray— and employee stock ownership plan companies—e.g., Publix Super Markets and W.L. Gore—demonstrate this. Publix, for example, earned $2.3 billion in profits on $34.6 billion in sales in 2017 and is the world’s largest employee-owned company, with over 175,000 employees. Zugasti, one of the coauthors, hails from Mondragón, a worker co-op network that, the authors note, “is one of Spain’s top 10 multinationals, with about $13 billion in revenue from 105 cooperatives, and 75,000 employees.”

Walsh, Peck, and Zugasti differ, however, both in terms of who they represent and what they see as the drivers of growth. First, the who: The authors include not only longtime worker co-op advocates Michael Peck, executive director of the nonprofit advocacy group 1worker1vote, and Ibon Zugasti, who hails from the Mondragón network, but also Peter Walsh, who works for Oliver Wyman and has worked previously for Ernst & Young and Price Waterhouse. In other words, the article is an indicator of employee ownership’s growing respectability in business circles.

As for financing, Walsh and his coauthors argue that “a growing number of funders, both social impact funds and traditional institutions, are interested in financing workers’ takeover of a company.”

The social impact funds want to support it for social reasons, whereas hedge funds and others are recognizing that the superior resiliency and performance of worker-owned firms can improve their returns. This funding often comes through loans or financing vehicles specially designed so that workers and employees can retire outside investors over time after achieving a certain level of earnings while protecting and even growing their ownership stake.

For example, Heartland Capital Strategies, a union-backed nonprofit, is “bringing together institutional investors, private asset managers, and worker representatives to harness some of the $13 trillion of assets in workers’ pension funds to invest in worker-friendly businesses that offer good investment returns.” The authors also point to pending federal legislation that could “enable the U.S. Small Business Administration to make loans to intermediaries that help finance worker co-op transitions.”

Walsh and his coauthors also point to the promise of what they call “hybrid ownership forms” that sit somewhere between traditional worker cooperatives and ESOP companies. Such hybrid structures are still unusual in the US context. However, as NPQ noted last month, in Great Britain, a full 64 percent of employee-owned companies employ a hybrid structure similar to the kind that Walsh and his colleagues propose.

Already though, some US hybrid companies do exist. For instance, Walsh, Peck, and Zugasti point out that Sun Light & Power, a California solar industry company, recently developed what is being called an “ESOP-erative,” which is structured similarly to an ESOP, but with ownership shares distributed more equitably. As the authors explain:

ESOPs typically allocate shares to employees in proportion to their pay. But Sun Light & Power distributed half of the founder’s shares to employees equally, 25 percent based on the number of years each employee had been with the company, and 25 percent on the basis of each employee’s salary level. It also formed a body of employees known as the “Cooperative” that was open to anyone willing to learn the basics of business finance and gave all employees the right to vote for their board of directors based on their number of shares.

“Worker buyouts, the authors add, “are particularly likely to blossom in industries with organized workers who transition to union cooperatives.” For instance, last year 400 members of IAM (the International Association of Machinists and Aerospace Workers) Maine Lobstering Union “bought the wholesale operation of Trenton Bridge Lobster Pound and turned it into a worker-owned cooperative.” In Denver, taxi drivers, who are members of CWA Local 7777 formed the Green Taxi Cooperative in 2015, which is owned and operated by more than 150 taxi driver-owners.—Steve Dubb