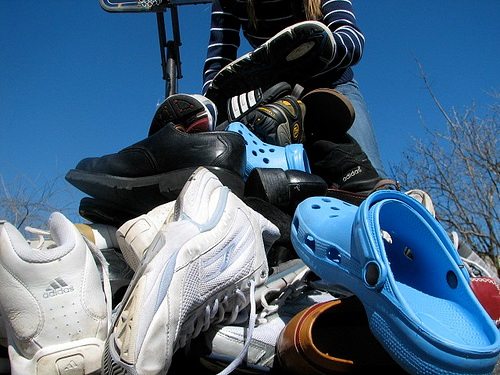 A group of country music stars, organized by Grammy nominee Billy Gilman, have come together to record a charity single with the goal of putting shoes on the feet of 500,000 people who need them across the world through the charity Soles4Souls. “I couldn’t imagine not having a pair of shoes, not just for the sake of being comfortable and looking cool, but I never thought until I got really involved that shoes enable you to get a job,” Gilman said recently. In a video on Gilman’s website, the singer says that one download of the song on iTunes will equate to one pair of shoes donated to someone in need of them.

The single, scheduled to be released on April 16, is called “The Choice,” and the press release on the Soles4Souls website claims that “never in the history of country music have so many stars united on one single song!” Participants in the song’s recording include Reba McEntire, Keith Urban, Randy Travis, and many others—even Kenny Rogers, who is no stranger to the charity single, given his participation in the genre’s iconic “We Are the World” (it was Rogers’ agent at the time, Ken Kragen, who contacted Lionel Richie about writing the anthem that he co-authored in 1985 with Michael Jackson).

Will some of that “We Are the World” magic rub off on this new single? The publicity plan includes a music video that organizers expect will be aired heavily on CMT and its assortment of media platforms. In addition, Regal Cinemas will air “an exclusive 30-second clip” of the song before movies in theaters around the country. We’ve seen charity songs do incredibly well in the past, such as Band Aid’s “Do They Know It’s Christmas?” and the aforementioned “We Are the World.” More recently, the “Hope for Haiti Now” telethon raised more than $60 million for earthquake relief in one night, which was followed by more proceeds from sales of the songs performed during the telethon. Heavy play from CMT and a 30-second clip before Regal Cinemas movies hardly seems likely to deliver similarly dramatic results, but then, 500,000 pairs of shoes is perhaps a more modest goal. Will you buy the single? –Mike Keefe-Feldman