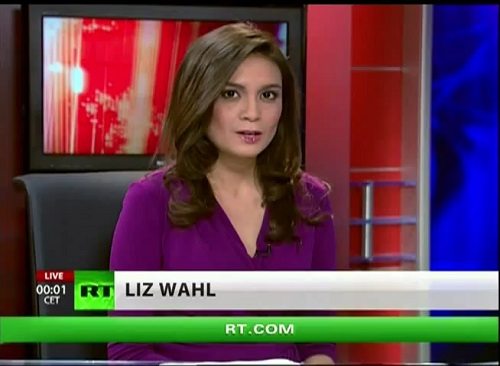 Perhaps you’ve seen the broadcasts of Russia Today among the many diverse channels in your cable package, or perhaps you’ve stumbled over RT’s professionally done newscasts while channel surfing in your hotel room. Launched in 2005, RT broadcasts news in English from a studio in Washington, D.C. If you might have thought Russia Today was simply an arm of the Russian government, you’re wrong, sort of; it is officially an “autonomous nonprofit organization” in Russia.

Nevertheless, RT gives pretty solidly positive coverage to Vladimir Putin. With the Russian invasion of Ukraine, the coverage was over the top for RT news anchor Liz Wahl, who announced her resignation from the network while on the air, presumably without having informed her bosses that she was going to do so.

“I cannot be part of a network funded by the Russian government that whitewashes the actions of [Russian President Vladimir] Putin,” Wahl announced. “I’m proud of being an American and believe in disseminating the truth and that’s why after this newscast I’m resigning.”

Wahl’s resignation followed this on-the-air statement from RT’s Abby Martin, who said during her Breaking the Set talk show, “Just because I work here, for RT, doesn’t mean I don’t have editorial independence and I can’t stress enough how strongly I am against any state intervention in a sovereign nation’s affairs. What Russia did is wrong.” Unlike Wahl, however, it doesn’t appear that Martin resigned.

Wahl had complimented Martin in a tweet, congratulating “my girl” for her “spectacularly off-message in Ukraine broadcast.” Later, Wahl explained her resignation to CNN’s Anderson Cooper: “RT is not about the truth,” she said. “It’s about promoting a Putinist agenda. It’s also about bashing America.” In a public statement, RT acknowledged and even defended Martin’s statement as within the context of her talk show, but denounced Wahl for what it called her “self-promotional stunt.”

Putin’s Ukrainian invasion might have been the opportunity for Wahl to resign, but it seems she had been uncomfortable with RT for some time. “It makes me sick that I worked there,” Wahl later told the Daily Beast. “When I came on board, from the beginning I knew what I was getting into, but I think I was more cautious and tried to stay as objective as I could.” She added, in a statement to CNN’s Piers Morgan, “I didn’t know exactly the extent of the propaganda that is this machine. I thought that the Cold War was over and maybe I didn’t realize that there would be this much of an infringement on the editorial…as much pressure…I tried to make the most of the situation. I am not saying that I haven’t done work that I’m not proud of. I tried to use my platform to pitch stories that I thought were important.”

Maybe Wahl will find herself with a new job pretty soon, having certainly lifted her profile with her on-air resignation, but that isn’t the issue. The “autonomous nonprofit organization” which includes RT is hardly an unbiased news source, but then we don’t know of many—or any—that are.

It takes a lot of guts to resign in protest against the policies of one’s employer when the resignation is over principle. Our favorite example of this kind of courage has long been the resignations of Peter Edelman and Mary Jo Bane as top officials in the Health and Human Services Department in 1996 in opposition to the Clinton Administration’s welfare reform proposals. We are always particularly impressed when these statements of principle occur within nonprofits, even a Russian autonomous nonprofit organization like Russia Today. As an employee—or former employee—of a nonprofit organization who chose principle over paycheck, Wahl reflects a nonprofit practice that we think should be honored by her peers in the nonprofit media.—Rick Cohen