For most of us, COVID-19 global pandemic’s breathtaking impact on the well-being and security of our family, friends, and neighbors and on our economy, healthcare, social services, and beyond has moved from abstractness to a harsh reality. We have all been touched in increasingly serious ways.

Many grantmakers have stepped up, and we have already witnessed many admirable interventions. But in acting quickly and decisively, it is vital that philanthropic responses don’t inadvertently perpetuate and exacerbate existing bias, racial inequity, and injustice through their giving.

This might sound obvious to some who believe they already incorporate a racial equity or racial justice lens in their grantmaking. For others who have not, incorporating racial equity in their giving might seem daunting. Regardless, more than good intentions are required to reach those who will feel the brunt of the pandemic’s impact, especially Black, Native American, Latinx, and Asian American and Pacific Islander communities.

What does a racial justice lens bring?

There is no doubt that everyone—no matter their race, economic, or immigration status, gender, age, or ability—will feel the impact of COVID-19 in some way. But people who are already targeted, marginalized, and underserved will feel the pain more than others. For these communities, COVID-19 comes on top of existing economic, health, education, gender and information inequities, as well as state violence that has shaped their everyday lives.

For example, it is well known that people of color are overrepresented in many vulnerable groups, such as low-wage workers, those without insurance and paid sick leave, the incarcerated, those without homes, and individuals from industries that entail high volumes of interaction with other people, such as caregivers and health care professionals; food, beverage, retail, and travel industry workers; and more.

Additionally, crisis situations such as pandemics, natural disasters, and social flashpoints often amplify racial biases that are deeply rooted in our history. These historically rooted structures, processes, and practices often get in the way of equitable security and opportunity for all.

The country’s largest foundations have a history of earmarking only a fraction of total grant dollars for efforts that specifically benefit people of color—only ten percent in 2016.

These numbers need to be much higher. Although more grantmakers are paying attention to racial equity than was once the case, many of these efforts only tackle part of the racial equity challenge. As we recently reported, uprooting racism that permeates political, cultural, and economic norms requires us to confront power, shift how we distribute our resources, and move toward system-wide transformation.

In particular, as my coauthor Rinku Sen and I have outlined in a report published by my organization, the Philanthropic Initiative for Racial Equity (PRE) earlier this year, we must move from simply pursuing racial equity to implementing a transformative vision of racial justice: 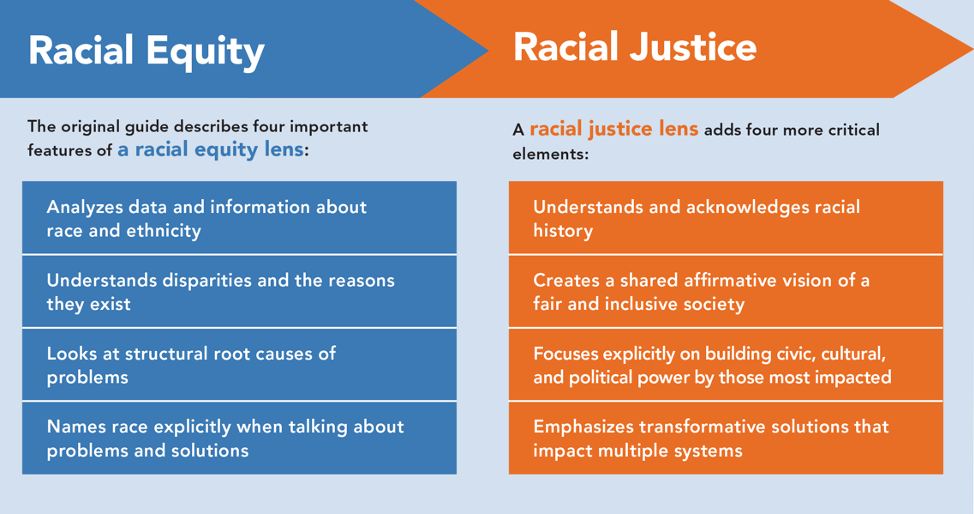 Why the “Who” Matters

Foundations need to give more now to address critical needs rising from the global pandemic. But it is just as important to act thoughtfully and ensure that their solutions truly factor in the following questions: Who shapes the solutions? Who needs more at this moment? Whose work can transform our collective future?

Nonprofits led by and accountable to communities of color have long been tackling the challenges of shrinking democratic practice, privatization, and many other policies that too often proliferate in times of disaster or crisis, as noted in Naomi Klein’s Shock Doctrine. These challenges are also often most pronounced regionally in the US South, where conservative political leadership directly undermines the aspirations of significant Black, Native American, Latinx, and Asian American and Pacific Islander (AAPI) populations. Because they are usually the first and hardest hit, Black and Brown communities often send out the first warning signals and have the most creative responses, even with scarce financial resources.

However, financial disparities persist within the nonprofit sector, and those most quickly able to approach funders with donor pitches and publish thought pieces in leading publications are not necessarily the most impacted by our current crises. The ones closer to communities are busy directly grappling with a broader range of critical needs. Although the larger national, often white-led efforts typically arise from their desire to step up to the needs of the moment, this “stepping up” often positions them for outsized voice, influence, and resources.

Even with the best of intentions, when we don’t take into account institutionalized and systemic racial biases and racism when deciding on grants to award, we increase the likelihood of perpetuating—if not bolstering—the status quo, further disinvesting from while burdening the people and communities we’re aiming to help.

Here are some examples what this could look like for communities of color in responding to COVID-19: