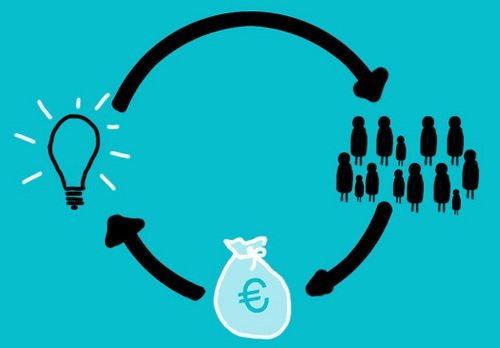 It’s getting crowded in the crowdfunding field. That’s according to TechCrunch.com, which reports that the British nonprofit Nesta has included thirty-one different crowd-funding websites in its newly published directory. The Nesta sites are oriented toward funding nonprofit innovations in the United Kingdom. Whether thirty-one is too many or not enough, these websites represent only the tip of the iceberg in terms of the exponential global growth of crowdsourced funding mechanisms.

The sharp upswing in crowdfunding, which is nothing more than old-fashioned networking to attract resources amped up by the Internet, is fueled by the poor economy and credit crunch. In 2011, over 450 crowdfunding websites generated $1.5 billion in wide-ranging investments from private business equity to arts patronage and charitable donations. Last year, crowdfunding websites raised $2.7 billion worldwide from individuals—an 81% increase in one year. And that amount is expected to nearly double again, growing to $5.1 million in 2013. North America is currently the epicenter of crowdfunding, accounting for over 60% of global activity.

Nonprofits and other creative projects with non-financial rewards for investors are prominent on the crowd-funding marketplace. NPQ recently covered two Chicago based nonprofit crowdfunding projects, here and here. At the global scale, over half of the funds raised globally in 2012 were invested in charitable organizations or other projects with non-financial rewards. Nesta, the U.K. based charity, estimates that crowdfunding in that nation has the potential to meet 50% of the charitable sector’s needs (and 20% of the arts funding needs as well).

As crowdfunding grows, and especially as it grows into such mainline business financing activities as secured lending and equity investments, it’s becoming subject to increased regulatory scrutiny. In the U.S., for example, the Securities and Exchange Commission is now establishing regulations to govern crowdfunded equity investing, as stipulated in the 2012 JOBS Act. From a policy standpoint, nonprofits interested in economic development and asset building especially in poor and remote communities may want to track these developments and their potential for increasing capital access.

From a charity standpoint, the crowdfunding phenomenon bears investigation by all nonprofits. The experience of early adopters from both commercial and nonprofit sectors suggests that web-based crowdfunding solicitation provides rapid, useful feedback about the soundness of an idea. It can reach niche markets and special interest groups efficiently across wide geography. Through interactive messaging and video updates, it helps project sponsors and investors to build strong connections to a shared vision over time that can result in longer term funding partnerships.

Crowdfunding won’t fit all needs, of course. But if you aren’t looking into its potential yet, what are you waiting for?—Kathi Jaworski