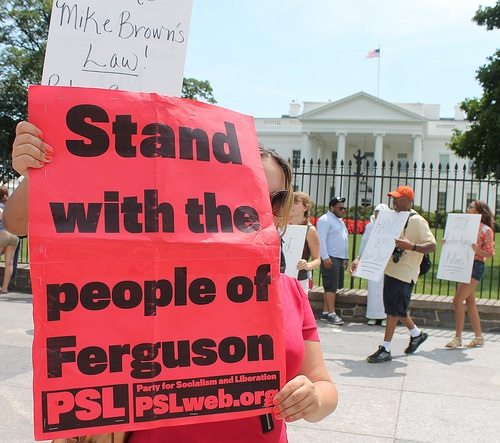 As our readers know, journalism is changing shape rapidly and there is a good deal of experimentation going on. This is one more iteration on developing models in the coverage of breaking news—in this case, in Ferguson, Missouri.

This morning, the governor of Missouri called in the National Guard after another night of “unrest.” Residents, including families, were tear-gassed during a peaceful demonstration in protest of the shooting of an unarmed teenager in that primarily African-American community—a community in which of 53 police officers, only three are African American, and a community in which the police presence over the past week has become increasingly militarized. All of it looks excruciatingly familiar and persistent. The gassing occurred after a few local incidents of what Ronald S. Johnson, the Missouri Highway Patrol captain brought in by Governor Nixon to head security, called “premeditated criminal acts” intended to provoke the police.

Beacon, a company in Oakland, California originally funded by Y-Combinator and designed to crowdfund journalism, has been running a campaign to pay journalists working on the ground in Ferguson, Missouri.

Beacon spread the word about its invitation-only campaign by tweeting its interest in hearing from independent journalists who wanted to cover the developments in Ferguson. One might argue that the press was already very much in evidence in Ferguson, but for Beacon, it was a bit of an experiment on its model and therefore worth a try in terms of testing new practice.

An explanatory blog post from Beacon is headlined, “Can We Crowdfund Breaking News?” In Ferguson, the importance of citizen journalists and paid journalists should be obvious. Citizens have turned over cellphone videos of the shooting of Mike Brown, revealing the sad truth about what happened to that unarmed young man.

Whether they are crowdfunded or not, paid journalists have a crucial role, underscored by the repeated arrests of journalists by the county and state police, including journalists from the Washington Post, the Huffington Post, the Financial Times, The Telegraph, and even Sports Illustrated. The fact that these reporters were arrested and then quickly released could be construed as press intimidation (and the reporters could, if they wanted, claim false arrest, though it appears that they are all assiduously trying to keep the focus on the events happening on the ground and not on themselves). As a clear example of intimidation, a tear gas cannister was lobbed directly at an Al Jazeera film crew; when they ran away, the police came and dismantled their cameras and lights.

Do crowdfund more people able to report on what is happening in Ferguson, but remember the important role of the press and press freedom in making sure that the truth of Ferguson reaches the public nationwide. We’d like to hear your reactions to this.—Ruth McCambridge