Cultivating the Donors, Volunteers of Tomorrow with a Card Game 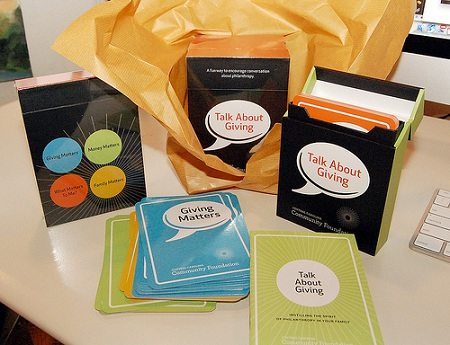 In a “Bucks” blog posting for the New York Times, Ron Lieber recommends the Central Carolina Community Foundation’s (CCCF) Talk About Giving game. The game is actually a stack of cards with questions and statements geared to moving the dinner table discussion to a family’s philanthropic giving, engaging kids in the process. Lieber shares some of his favorite questions in the stack:

The CCCF, which was established in 1984 and has invested more than $61 million in the 11 South Carolina counties where it connects donors to causes, imagines the card game (which costs $13, including shipping and handling) as a method of moving the conversation “from ‘I want’ to ‘Let’s give.’” In describing the need for opening up such conversations, the CCCF states, “Research shows that while 90 percent of us want our children to be charitable, a shocking 77 percent of children under the age of 17 are either totally unaware that their parents give charitably, or they are clueless about how and to whom their parents give.”

In addition to the card game, the Talk About Giving program includes a robust website featuring a wealth of related posts, such as this recommendation of The Giving Book by children’s author Ellen Sabin, this timely tip for engaging kids in the recent Giving Tuesday event, and this overview of ways to discuss homelessness with children.

As nonprofits of all stripes look to donors for crucial end-of-year giving support, NPQ is also interested in what is being done to cultivate the next generations of philanthropists and volunteers. Yesterday, we took note of the Heifer at Hanukkah program, an effort to bring the work of Heifer International into prominence during Jewish families’ current Hanukkah celebrations. CCCF’s Talk About Giving program is another example of that same work of cultivating and educating kids about the importance of giving money or time. Does your organization have any formal or informal education and outreach efforts to kids that you hope might lead to giving a decade or two down the road? If so, please share with us below. And if not, why not? –Mike Keefe-Feldman