May 23, 2011; Source: Wall Street Journal | Mayor Bloomberg had proposed to create or preserve 165,000 affordable housing units by 2014. But he is also proposing to cut $285 million from the capital budget, which threatens the city’s ability to meet the goal. 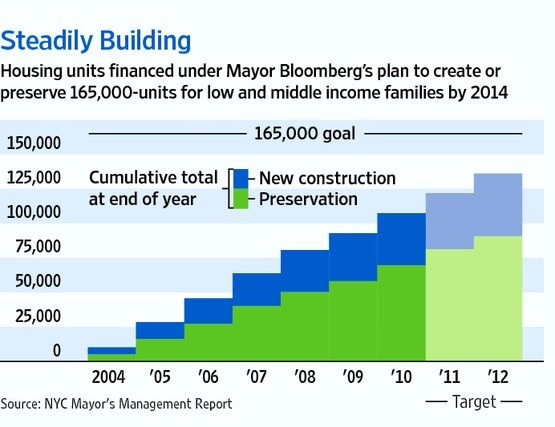 If this were the only cut, perhaps $285 million out of a total of more than $8 billion wouldn’t be more than a glancing blow. But this cut follows a prior cut in the 2009 capital budget.

In each case, the housing budget is taking among the biggest hits in the mayor’s budget. To meet the 165,000-unit goal, the mayor is shifting his numbers. Originally, the plan was for building 92,000 new low- and middle-income units and 73,000 to be preserved. Last year, the mayor lowered the new construction total to 65,000 and the preservation total to 100,000 and extended the timeframe from 2013 to 2014.

Nonprofit critics see a numbers game with the budget and the targets. The city’s nonprofit community development sector will be hard pressed to play its typically productive role if the mayor’s program encounters continued lengthening of the target’s end-date and reduction of the capital budget subsidy.—Rick Cohen