Hierarchy and Occupy: A Prediction 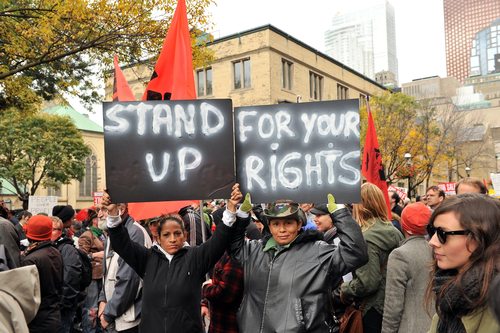 Ray Pensador is into writing open letters lately. Just this month alone on the Daily Kos, Pensador has an open letter to Senator Bernie Sanders on NSA lying and another to the Occupy Wall Street movement. To OWS, Pensador says, “You were right all along.”

Specifically, Pensador writes, “the non-hierarchical organizational approach the Occupy Wall Street movement embraced from the beginning was the right one all along.” He predicts that, “As the movement reemerges with more strength and power than ever this year, the non-hierarchical leadership approach will be its biggest strength.”

His argument is that the U.S. government, using the apparatus of the NSA, which works hand-in-glove with private corporations to advance their interests, “has been turned against law-abiding citizens exercising their First Amendment rights.” In fact, citing a report titled “Dissent or Terror,” Pensador says that the U.S. government and private corporations work together in “fusion centers,” collaborating on spying against American citizens, including OWS activists.

One example of the public-private partnership between government and corporate spying is Infragard, described as an “association of businesses, academic institutions, state and local law enforcement agencies and other participants dedicated to sharing information and intelligence to prevent hostile acts against the United States.” The other is the Domestic Security Alliance Council, an intelligence-sharing partnership whose board includes 29 corporations and banks, including Bank of America, MasterCard, Citigroup, American Express, Barclays, RBS Citizens, 3M, Archer Daniels Midland, ConocoPhillips, Time Warner, Merck, and Wal-Mart, plus government co-chairs from the FBI and the Department of Homeland Security.

Pensador outlines a number of examples of “Orwellian” public-private intelligence gathering efforts and concludes that they are evidence of the success of Occupy Wall Street: “The Occupy Movement was enormously effective and successful,” Pensador writes, “if one takes into consideration the massive amount of resources the corporate state invested in suppressing it.” He predicts a “big resurgence” for the Occupy movements in the U.S. and internationally, in part a reflection of an ongoing “major global upheaval comparable to 1848, 1917 or 1968.”

Whether or not Pensador is accurate in his prediction that the Occupy movement is going to relaunch bigger than before, is his laudatory analysis of Occupy’s non-hierarchical structure also “correct?”

“The situation does not lend itself for the Movement to rely (only) on top-down leadership, on hierarchical organizations (which have all been targeted for manipulation and co-option), on charismatic individuals,” Pensador says. “Let’s form people-to-people coalitions capable of organizing direct action on an ongoing basis (sustained).”

Pensador doesn’t offer a particularly compelling analysis backing up his non-hierarchical prediction, but he isn’t outside of a current wave of nonprofit management thought. The response to Ruth McCambridge’s commentary on the Zappos model of “holacracy,” a nonhierarchical corporate management approach, suggests that there is something of a reaction in the nonprofit sector against traditional corporate organization models. Pensador may actually be talking about the inherent power of nonprofit or grassroots networks (which, by the way, is the topical theme of the latest edition of the print version of Nonprofit Quarterly magazine), but the most effective networks operate in organized fashions, even if they aren’t meant to be permanent organizational structures. Nonetheless, his laudatory view of the Occupy movement may reflect a burgeoning community-based backlash against corporations and their structure.—Rick Cohen