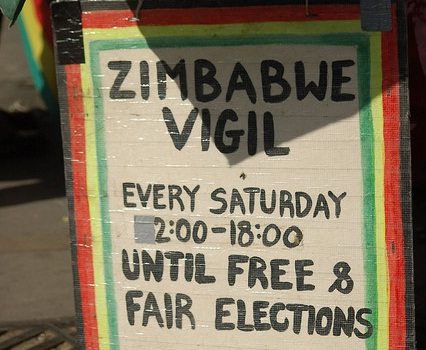 On Monday, European Union foreign ministers gathered in Brussels lifted some sanctions against Zimbabwe government officials and said that sanctions against a state-run diamond mining company would also be lifted if Zimbabwe holds fair elections. However, as NPQ recently noted, there have been numerous reports of police raids against NGOs in Zimbabwe that offer voter education or promote political reforms. The EU took this compromise step to reward the Zimbabwean government for what EU officials see as reforms to the political process related to an upcoming constitutional referendum in the country in March.

“This step forward … adds further momentum to the reform process and paves the way for the holding of peaceful, transparent and credible elections later this year,” an official EU statement said. According to Reuters, “[p]rior to Monday’s decision, 112 individuals, including more than 20 ZANU-PF members of the government, and 11 companies were on the EU sanctions list.” The ZANU-PF is led by Zimbabwe’s controversial and seasoned President Robert Mugabe. The EU originally put the sanctions in place in 2002 in reaction to ongoing alleged human rights violations by Mugabe’s regime.

For the last four years, Mugabe has marginally abided by a rocky power-sharing agreement with Prime Minister Morgan Tsvangirai and his Movement for Democratic Change (MDC) party. A Mugabe spokesman blasted the easing of sanctions as “outrageous and preposterous” while ZANU-PF’s official position remains that the EU sanctions are illegal in the first place. Party spokesman Rugare Gumbo told Reuters, “We don’t accept any conditional lifting of these illegal sanctions. We don’t expect it to be piecemeal. That is nonsensical as the sanctions are illegal anyway. This is mischievous and it does not answer the question of why they were put in [in] the first place.”

However, MDC welcomed the partial lift as a positive recognition of moderate progress in political reform. “We need to respect the rule of law, rights of citizens, the security of the vote and voter and stop harassing civi[l] society activists,” MDC spokesman Nelson Chamisa said, adding that, “We need to throw away the badge of pariah state and join the family of nations.” Even as the EU and the MDC point to progress, however, there is no sign that Mugabe’s government is considering any steps to relinquish control of power, as evidenced by the recent raids on NGOs thought to be distributing “subversive” voter education materials. –Louis Altman