Disabled Protesters in DC: “Our Homes, Not Nursing Homes” 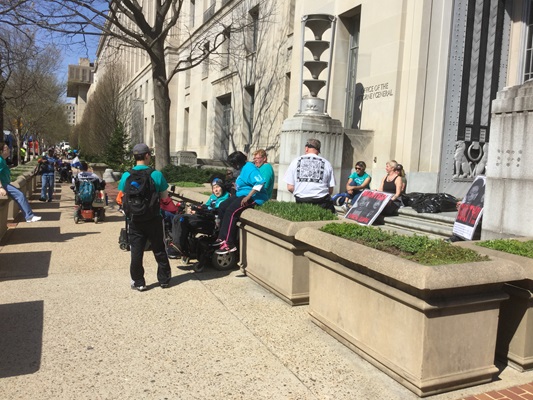 Imagine being sequestered in a nursing home from a young age because the resources that would allow you to live integrated into larger society were unavailable. Would you call that a violation of your civil rights?

About two hundred activists in wheelchairs lined up yesterday along the bike racks in front of the White House fence, chanting, “our homes, not nursing homes” and “disability rights are human rights.” This is the second year that ADAPT, a group of activists with disabilities, staged a protest including civil disobedience to call attention to what it sees as the Obama administration’s relative inattention to the civil rights of this population.

ADAPT wants the president to actively advocate for and back legislation that supports people with disabilities living as an integrated part of the community. In particular, it is calling for Obama’s support for the Disability Integration Act (S.2427) proposed by Senator Chuck Schumer. As an overview, the group was demanding the White House do the following:

“It is clear that the Obama administration doesn’t recognize that people with disabilities are an oppressed but resilient community with our own civil rights movement,” said Bruce Darling, an ADAPT organizer from Rochester, New York. “Every day under the watch of this president, disabled Americans are denied their most fundamental and inalienable rights when they are locked away in nursing facilities and other institutions. We are urging to the president to defend our civil rights instead of looking the other way.”

The group later moved to the Department of Justice, where it emphasized the need for attention to the violation of civil and human rights.

“Research has shown that people who forced into nursing facilities have their lives cut short, and younger people are being institutionalized in greater and greater numbers. How can the DOJ not see this as a civil rights issue?” said German Parodi from Philadelphia. “Disabled lives matter too.”

ADAPT wants Attorney General Loretta Lynch to recognize publicly that “community integration of Americans with Disabilities is a civil rights imperative, and that she will personally oversee efforts to assure that DOJ addresses this injustice.”—Ruth McCambridge