Do Citizen Journalists Need a Code of Ethics? 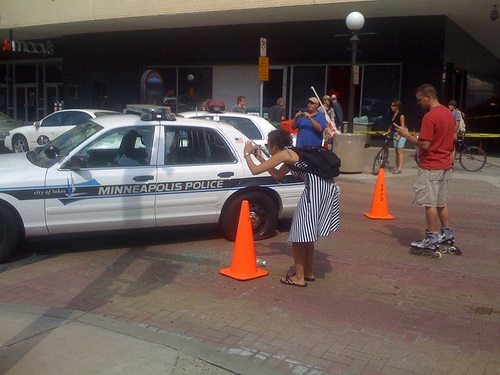 “A blog is not writing. It is graffiti with punctuation.” This now famous and quite wonderfully dismissive line is delivered in the movie Contagion by Elliot Gould’s character to Jude Law’s character. In fact, according to a posting by blogger Tim Baran, graffiti may actually be more long-lasting than a blog, which is estimated to have a “shelf-life” of relevancy of a mere 12 hours. That’s for a good blog, and even the worst graffiti takes longer than that to erase.

The stark difference, however, is that in that 12-hour window of relevance, a blog can be read by thousands, even millions of people who may believe that what they are reading is real or factual, not just the opinion of the blogger. That initial blog can then go viral, and has the potential to do some damage. This has caused some political campaigns to lash out against bloggers who might consider themselves to be “citizen journalists,” a sentiment that may be shared by nonprofit organizations facing the proliferation of online whistleblowers.

Take the case of the bartender who surreptitiously recorded Mitt Romney making the now-famous remarks about the “47 percent of people” who would vote for Obama no matter what and, therefore, were not people he (Romney) would worry about. The bartender’s video was acquired and ultimately posted by David Corn of Mother Jones. The results of this posting were explosive, being viewed by many as the remarks of an uncaring human being who therefore did not deserve to be president. Although Romney’s loss to Obama cannot be attributed to this incident, it certainly had an impact well beyond the 12 hours of relevance mentioned above.

It is understandable, then, that campaigns are wary of people like the bartender who happen to witness an event, have the technology to record it, and the ability to post it online for anyone to see and pick up. It is an easy way for a story to go viral and get out ahead of the campaign’s spin-doctoring.

This leads to other, potentially bigger issues for the bloggers themselves. The bartender in question was acting as a concerned citizen and did not post the video on his own blog.

Another example from the same time period involves someone who considered herself to be a citizen journalist. In 2008, Mayhill Fowler, a blogger for the Huffington Post, was a supporter of Barack Obama and made a contribution to the campaign that made her worthy of being invited to a donor-only special event in San Francisco that was closed to reporters. Fowler recorded comments Obama made in San Francisco about small-town voters who “cling to guns, or religion, or antipathy to people who aren’t like them.” She ultimately posted these comments on her blog on the Huffington Post, and the reaction was immediate and vitriolic.

There are a number of issues here. One is that Fowler made a contribution to a political campaign, which traditional journalists are often forbidden to do by their employers. Second, Fowler entered the event as a donor and supporter, but then acted as a journalist, meaning she ultimately misled the campaign, even though that may not have been her intent in attending the event.

It is hardly worth stating that the Internet is here to stay, and citizen journalists finding ways to bring their work to the public is not new to the Internet—it’s just easier than it used to be. The Poynter Institute suggests that citizen journalism manifests on the Internet in a multitude of ways, and explains eleven different examples of how such work can be used and viewed by readers and by traditional journalism. (Newswire writers, like those who write for NPQ, are included on that list.)

An article from 2009 posted at the University of Wisconsin’s Journalism Ethics website discusses the issue and mentions several codes of ethics for bloggers that have been developed over the years. Some common guidelines include: be transparent and announce any potential conflicts of interest (something Fowler clearly did not do); clarify what is fact and what is opinion; and if there is a source that backs up your thoughts, post a link to it (which this writer has attempted to do). These are basic ideas that bloggers, citizen journalists, online whistleblowers, and, yes, newswire correspondents should be held to.—Rob Meiksins