Does Waltons’ Philanthropy Inoculate Them against Criticism of Walmart? 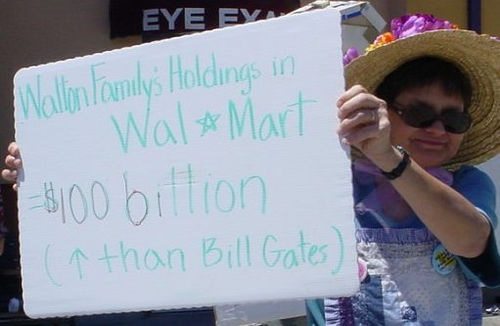 Does the philanthropic largess of the Walton family insulate them from blame for the perceived injustices their Walmart chain inflicts on society? That’s a question asked by Casey Cep in Pacific Standard, a publication that focuses on economics, society and justice, education, and the environment as seen through the lens of human psychology and sociology.

It’s a lot like the question asked last week by the editors at TMZ, the celebrity website and TV show, about Donald Sterling, the now discredited and banned owner of the NBA’s Los Angeles Clippers: “Here’s the moral dilemma…you’re a charity, and a really bad guy—a.k.a. Donald Sterling—has given you a TON of money…. Do you now give it back?”

Cep starts out talking about a New York Times report that the Walton Family Foundation has contributed hundreds of millions of dollars to educational causes around the country, with $164 million in 2013 alone—mostly to charter schools, as well as the think tanks that promote them and other groups that advocate for them. She then quotes the author of the Times article, who writes, “The size of the Walton foundation’s wallet allows it to exert an outsize influence on education policy as well as on which schools flourish and which are forced to fold. With its many tentacles, it has helped fuel some of the fastest growing, and most divisive, trends in public education.”

Cep points out what we all know, that the Waltons are the richest family in the world, worth more than $148 billion. The Economic Policy Institute has said that the Waltons were as wealthy as the poorest 48.8 million families in America in 2010. Walmart employs 1.2 million Americans, so if they were to divide their family fortune amongst their employees, each would receive around $105,000. Cep also highlights the fact that Walmart’s 4,200-plus stores pay wages which, like their prices, are lower than the competition’s. She writes that Walmart’s employees often rely on government aid—healthcare through Medicaid, food assistance through SNAP, reduced or free lunches for their kids at school.

“Walmart’s employees qualify for these government benefits because even though they are employed, some of them full-time, Walmart does not pay them enough to live above the poverty line,” Cep writes. She says that by one account, Walmart made $16 billion in profit last year, but benefited from “tax breaks and taxpayer subsidies estimated at more than $7.8 billion” in the form of $6.2 billion to employees through assistance programs, $1 billion in tax breaks and loopholes, and $607 million in avoided taxes by the Walton Family. So when the Walton Family Foundation does something like give $164 million to educational causes, as it did last year, we might ask why they distribute aid to anyone but their own employees.”

Cep writes that pointing out this apparent irony offends many of the Waltons’ beneficiaries. She quotes one charter school director as saying, “Those who want to criticize any philanthropy group for giving money to kids to change their futures, there’s something wrong with them.”

Her reply is that the business model of Walmart has a lot to do with these kids’ futures being imperiled: “The neighbor who comes with his garden hose to put out the fire in my house is no hero if he is the one who set my house on fire, or if his failure to support the local fire company is the reason it can no longer respond.”

Cep concludes her piece by stating, “Charity is not an inoculation against criticism, though it is so often used that way. Even if you are not opposed to the charter school movement, then you still might question a corporation whose charity is made possible by the exploitation of its employees. It is not only what a corporation does with its profits that matters, but how such profits are made.”

Her commentary is timely in light of the Sterling scandal, because it reminds us of a question nonprofit leaders have asked themselves and debated all over America since the robber barons practiced philanthropy over a hundred years ago. The sad truth is that some of the financial support charities receive comes from individuals who are less than honorable, or from wealth created in ways that many people might find offensive or which conflicts with the very values and missions of the charities being supported.

But we live in the real world—so should we take the money and hold our noses? Or perhaps understand that in this diverse world, there are many different paths to righteousness. We’d love to hear your thoughts.—Larry Kaplan