Donor to University: My Money or Your Academic Freedom! 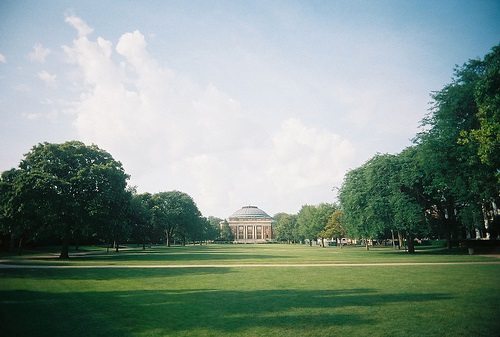 In response to the University of Illinois Urbana-Champaign’s decision allowing the rehiring of James Kilgore to an adjunct faculty position (either in the university’s Center for African Studies or the Global Studies program), Chicago businessman Richard Hill has threatened to withhold the remaining $4.5 million of a $6.5 million to the University’s bioengineering department which now bears his name.

“I no longer wish to be associated with University of Illinois,” he wrote in a letter to top U of I officials after the board’s decision. “The Academy at the University of Illinois has clearly lost its moral compass. I will not contribute neither time nor money to such a morally debased enterprise,” Hill said. “If they stand up and police their own organization to assure they are of the highest standards, I will stand with them till my dying days.”

Kilgore served five years in prison after pleading guilty to federal explosives and passport fraud charges stemming from his role as a member of the Symbionese Liberation Army. He joined the adjunct faculty of UIUC in 2010. When his background as a convicted felon become widely known, the university chose not to rehire him for the fall semester.

Earlier this year, UIUC rescinded a job offer to Professor Steven Salaita under pressure from donors who were upset by Salaita’s tweets commenting on Israel’s conduct during the recent Gaza conflict. That case also brought into question the university’s commitment to academic freedom and the role that donors can and should play in the operation of a university.

“For any university, but especially a public institution such as Illinois, the encroachment of donor pressure on the administration is a harbinger of the destruction of academic freedom. Wealthy donors are able to step in and exert strong influence because public funding sources, such as the state legislature, have systematically withdrawn support for public universities. Wealthy donors today seldom have an interest in independent, objective academic study; they’re interested in advancing their own notions of how the world works or should work—in ideology, not ideas.”

Pressure on the university does not only come from donors; members of the State legislature have also challenged UIUC on its policies. State Rep. Jeanne Ives said she “must take into consideration how the funding that is given to any public institution is used by that institution. I…recommend the university demonstrate more responsible and constructive choices in hiring faculty for the university.”

At a time when financial pressures on public universities are drastic, the challenge of uphold longstanding principles of academic freedom and free speech that have long been hallmarks of the American universities grows harder as public and private funding become pressure points for political interests.—Marty Levine