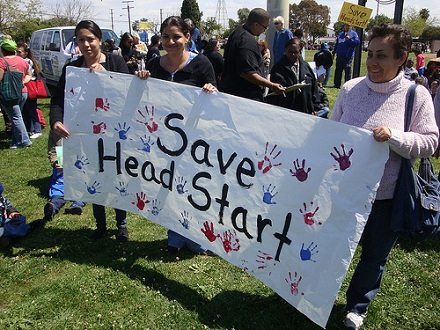 Two converging trends at the intersection of nonprofits and government have collided in the arena of Head Start grants. The Obama administration faces well known budgetary constraints which all but impel the White House to look for cost savings wherever it can, and this may be changing the funding landscape for Head Start agencies, which are the products of the “War on Poverty” initiatives of the 1960s.  According to this article in the Wall Street Journal, this year will be the first time that Head Start agencies “will have to compete for a share of $7.6 billion in federal funding under a plan aimed at weeding out low-performing preschool centers.”

The Obama Administration’s move has been applauded by Congressional Republicans and other Head Start critics, such as Rep. John Kline (R-Minn.), chairman of the House Committee on Education and the Workforce, who lauded what he saw as the administration’s effort to “protect taxpayer dollars by requiring the lowest-performing programs to re-compete.”

The administration’s “initial move,” according to the WSJ, was to identify 132 out of the 1,600 Head Start programs as “deficient.” Because of that designation, instead of getting their grants automatically renewed by the Department of Health and Human Services (HHS), they will have to “prove they are effective in preparing children for kindergarten before they will be given future funding.” HHS announced the new funding process last week, and Yvette Sanchez Fuentes, who oversees Head Start for HHS, explains, “We want to open this up to competition and see if there are other organizations out there that are innovative and creative.”

“This is about holding all programs accountable,” said Sanchez Fuentes. But Head Start agencies may aim at holding the administration accountable. Head Start programs in 10 states have sued the administration, charging that the application of the new regulations is unfair because they hold programs accountable retroactively for shortcomings that date back a couple of years (and presumably might have been addressed and resolved during that time). Perhaps more troubling, the lawsuit also alleges that the administration manipulated the rules so that at least 25 percent of the Head Start programs would be classified as deficient. Implicit in this allegation may be the idea that finding that large of a slice of programs out of the competition would open up the program to the new, outside players that the administration—and Republicans in Congress—think would add more bottom line efficiency and effectiveness to the program.

Many, including Steven Barnett, the director of Rutgers University’s National Institute for Early Education Research, increasingly think that the accomplishments of Head Start and its impact on pre-kindergarten children have been overstated. An HHS analysis says that as many as 44 percent of Head Start programs could ultimately be classified as deficient under the regulations.

The Wall Street Journal quotes Barbara Haxton, executive director of the Ohio Head Start Association, who said, “Competition is a good thing, but having a wholesale auction of Head Start just for the sake of competition is not a good thing.” The Head Start move is another example of the Obama administration’s penchant for opening up programs to competition that were once generally all but automatic in renewing grants. For the past couple of years, the Obama administration has advocated that Community Action Agencies be compelled to compete with other organizations for shrinking Community Service Block Grant (CSBG) funds, another product of the “War on Poverty” initiatives of the 1960s. The changing nature of federal government contracting, which is no longer, at least under the Obama administration, beholden to old constituencies, is worth watching to see if the desired results—better program impacts, improved cost savings—actually materialize.—Rick Cohen