Egypt Cracks Down Hard on Protests and Protestors 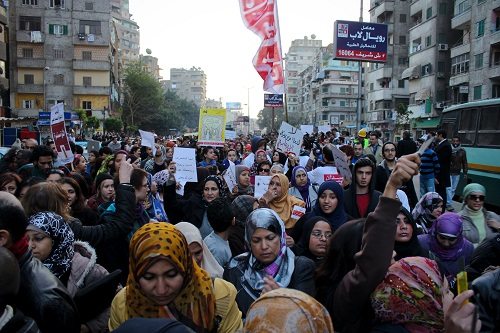 Last week, a new law was passed in Egypt that requires protest organizers to give notice to police at least three days prior to any planned demonstration involving more than ten people. It also provides the police with the power to ban demonstrations if they deem them a threat to public order.

Last Wednesday, 14 women, Morsi supporters, received prison sentences of 11 years each, and seven minors were placed in juvenile detention for protesting. And yesterday, police arrested the head of the defense team for the women, Ahmed El-Hamrawy, charging him with incitement to violence.

This latest arrest comes after a statement made by the military government, which indicated that that the women would be issued a full pardon by acting president Adly Mansour after their cases were processed by the court.

Lawyer Mahmoud Farouq of the defense team told CNN, “This means that any lawyer who comes close to the case will be detained.”

“El-Hamrawy was part of Morsi’s opposition. He demonstrated against him on June 30, but he’s been involved in defending freedoms since July 3,” when the military removed the Islamist president from power, Farouq told CNN. “He’s being punished for that.”

Egypt’s secular activists are accusing the government of giving free rein to police abuses and military power, and say the law is intended to suppress dissent as Egypt nears a nationwide referendum scheduled for January on the amended constitution.—Ruth McCambridge