The Elite Escalator: The American Dream Funneled through Select Colleges

Much of the intense concern over the U.S. educational system is driven by economics. Will graduating students be able to get good jobs in a changing economy? Will they be better off than their parents? Can the growing gap between the very rich and the rest of society be narrowed?

There’s no question of the financial benefit that grows the higher up the educational ladder a student progresses. 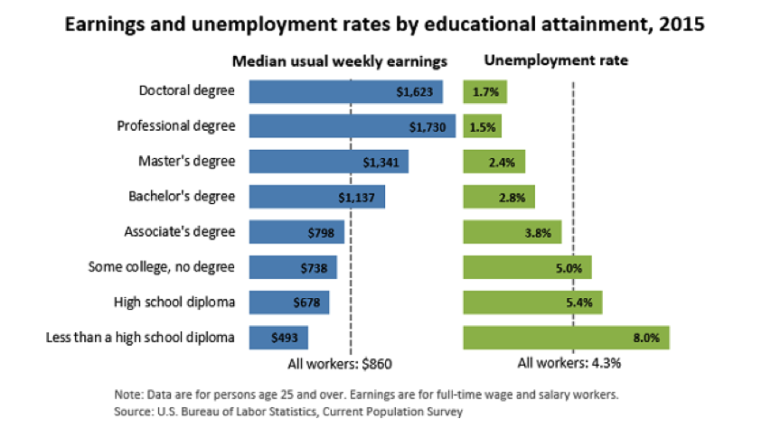 But for those currently living in or close to the poverty line, does higher education, college and beyond, guarantee upward economic mobility? Based on an analysis recently published by researchers at the Equality of Opportunity Project, the answer is that a college degree remains important and does fuel real movement. Even though it is much harder for a child whose parents are poor to find economic success in their adult years, it is possible. But, according to the Economist, not all colleges are equal.

For those who start in poverty, a path to prosperity does exist. Lower-income students who attend an elite university have nearly the same chance of reaching the upper-middle-class as do their better-heeled peers. Regardless of family income, a graduate from one of the Ivy League-caliber institutions, a clutch of America’s most prestigious universities, has roughly a two-thirds chance of making it into the top 20 percent.

The EOP research, using U.S. Department of Education data on all college students from 1999-2013, developed “mobility report cards” that correlated parental incomes with earnings when students were in their mid-thirties on a university-by-university basis. Their findings on college accessibility raise the specter of an economically segregated system of higher education.

Children with parents in the top 1% are 77 times more likely to attend an Ivy-Plus college than children with parents in the bottom 20 percent. More broadly, looking across all colleges, the degree of income segregation is comparable to income segregation across neighborhoods in the average American city. These findings challenge the perception that colleges foster interaction between children from diverse socioeconomic backgrounds.

This discriminatory pattern of acceptance does not reflect any sensitivity to how specific students will do. All students at the most elite schools do well post-graduation, and there is no significant difference based on a student’s economic status. The authors conclude, “Students from low-income families who are admitted to selective colleges are not over-placed, since they do nearly as well as students from more affluent families. This result also suggests that colleges do not bear large costs in terms of student outcomes for any affirmative action that they grant students from low-income families in the admissions process.”

The data also indicate that having lower-income students make up a larger portion of the student body need not be a barrier to upward mobility, with many examples of diverse schools whose students do quite well.

Where the elite schools do demonstrate their unique impact is in their ability to support movement into the highest economic strata of society, the proverbial 1%, defined by the Economic Policy Institute as households with 2013 annual incomes of $389,436 or more.

If we measure “success” in earnings as reaching the top 1% of the income distribution instead of the top 20 percent, we find very different patterns. The colleges that channel the most children from low- or middle-income families to the top 1% are almost exclusively highly selective institutions, such as UC–Berkeley and the Ivy-Plus colleges, where three percent of students from the bottom fifth reach the top 1%.

Because upward economic mobility seems not simply related to a college’s “elite” status, a factor that may not be replicable in other settings, learning from the success of other schools becomes critical for policymakers. What are they doing that can be replicated? Policymakers should also be looking at how access to the most successful non-elite schools can be expanded, especially since their tuitions are significantly below the level of the elite schools.

On the other hand, because all students who attend elite schools do well and, by their attendance, have a significant leg up on reaching and accumulating great wealth, their doors need to be opened to a more diverse student body. Current efforts building diversity seem not to be working, as the picture of the student body at these schools has stagnated for many years. If we are committed to equal opportunity for all, then new and more inventive methods of increasing their low-income student body are desperately needed.—Martin Levine