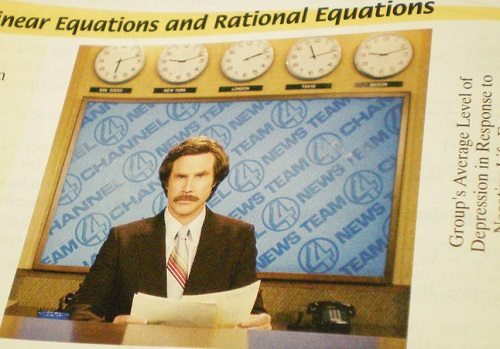 Notorious television journalist Ron Burgundy was celebrated yesterday with the temporary—some might say momentary—renaming of historic Emerson College, founded in Boston in 1880, in his honor.

Burgundy is, of course, a character portrayed by actor Will Ferrell in the film Anchorman: The Legend of Ron Burgundy and the upcoming Anchorman 2. (The publicist for the film is apparently an Emerson grad, which made this event possible.)

As he received his accolade, he took the time to pay homage to Phil Glenn, interim dean of the school’s college of communications, although he “mistook” him for former astronaut John Glenn. “It was only a short while ago I was covering your lunar orbit of the moon,” the character said.

Emerson renamed itself the “Ron Burgundy School of Communication” for the day. Burgundy was clearly moved, saying that Boston was one of his 400 favorite cities. “I’m literally in a glass cage of emotion right now.”

Some professors and student journalists at the school were worried about whether it was appropriate to name the school after a fictional character, but President Lee Pelton tried to mollify them by asserting that the renaming was for “one entire day and not a minute more.” Burgundy, on the other hand, repeatedly heralded that the Burgundy school would stand for a thousand years. Others noted that the stunt was connected to several courses of study at the college—filmmaking, acting, and marketing—and therefore relevant.

Apparently, there was no money exchanging hands and the whole event was just in good fun. But in our minds, there is little that Emerson could have done that would have gotten it more attention—and it is, after all a school focused on communication.—Ruth McCambridge