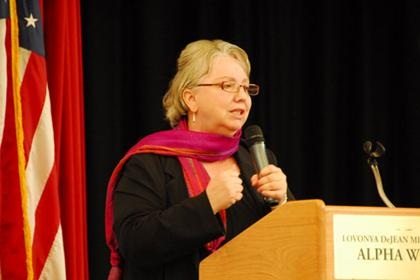 Earlier this year, declaring 2013 “the year of the mayoral races,” a pro-nonprofit political advocacy group called for support for mayoral candidates whose platforms grasped the needs and potentials of nonprofits and proposed policies that would strengthen the nonprofit sector in their communities. The barometer for a mayoral candidate’s nonprofit cred was his or her response to the question, “How will you include nonprofits as part of your economic plan?” To that end, Gayle McLaughlin might be the prototype for this new breed of pro-nonprofit mayor.

McLaughlin is the mayor of Richmond, California, a tough, distressed, mid-sized city, which recently made headlines, including coverage by NPQ, for its plan to use its eminent domain powers to take foreclosed properties from banks and other mortgage holders. McLaughlin reportedly identifies neither as a Republican nor Democrat, but as a Green. Does her policy of taking on the big banks and other investors that own pieces of mortgages mark her as a mayor who reflects the values and interests of the nonprofits?

In an interview with Carl Gibson, an investigative reporter at Occupy.com, the website of the international Occupy movement, McLaughlin credits the Alliance of Californians for Community Empowerment (ACCE) for bringing the problem of underwater mortgages to the attention of Richmond’s government. The eminent domain plan is to purchase these mortgages, refinance the houses at their actual market value, and help homeowners stay in their homes. She doesn’t appear to feel much sympathy for the haircut that the banks will take on these mortgages, despite the lawsuits filed against the city by Wells Fargo and Deutsche Bank. “We’ve got people hanging on by their fingernails right now. And we’ve bailed out the banks to the tune of $2 trillion,” she says. “We just want them to not stand in our way.”

McLaughlin explains how she became mayor of this city, whose economy is dominated by Chevron and its oil refinery:

“I won my first city council race in 2004, was on the council for two years, then decided that the progressive values I uphold could transform into progress at the mayoral level. I was elected mayor after two years on the city council, and re-elected again in 2010. I’ve been a community activist my whole life, and was involved with a group called the Richmond Progressive Alliance, or RPA. Some RPA members decided that we could project these progressive values by having decision-making power on the city council, so several of us ran. Each campaign was very hard, because from the beginning we made it clear that we wouldn’t accept any corporate campaign donations. Chevron is the major one-percenter in Richmond, and spent $1.2 million just in the 2010 election alone trying to defeat me and other progressive candidates. This is all in a city of just 100,000 people, and they’re scared because of the power we have here where elected officials are intertwined with grassroots movements. We’re doing all these great, innovative things and have constant pushback from Chevron and the banks.”

Behind the eminent domain strategy, is McLaughlin pursuing other policies that nonprofits might appreciate? She tells Gibson, “Every new development project in Richmond has to include affordable housing for low-income residents…. We want artists to relocate here, live in affordable housing, and bring vibrancy to our neighborhoods. We’ve got job-training programs for green jobs, co-op developments in the works, and would like to see more housing co-ops in Richmond. We’re trying every method to show Richmond is a place that values working families. We’re currently working with a nonprofit developer to turn the parking lot by the civic center into a working and housing co-op for creative people. We want to develop sustainably, and are working on including car sharing programs and shuttles to BART (Bay Area Rapid Transit) stops.”

Saving the homes of Richmond’s working class homeowners, an idea drawn from nonprofit activists, would seem to fit the notion of a mayor with an economic plan that includes nonprofits. The small city, population 106,000, has written to 32 banks and mortgage companies, offering to purchase the mortgages on 624 homes at their underwater fair market value—that is, what they are worth, even though it is less than the stated value of the mortgage. If the banks and mortgage companies refuse, they say they’ll acquire the mortgages through the city’s use of its eminent domain powers. A for-profit company, Mortgage Resolution Partners, chaired by former Lehman banker Steven Gluckstern, will be involved in fronting or finding financing for the city’s acquisition costs of the mortgages and arranging for their sale to new investors, resulting in significantly lower mortgage payment costs for the mortgagors. Although bank opponents charge that MRP is using Richmond simply as a money-making venture (MRP will charge $4,500 per property that it helps acquire and refinance), no one else with capital has stepped up to the plate to help Richmond’s property owners facing foreclosure.

Richmond’s eminent domain plan isn’t necessarily on a path toward immediate success. Just last week, the banks were in federal court to file an appeal of their September court loss against the city. The banks have been recruiting new allies such as credit unions, typically seen as competitors with or critics of banks, to join them in their challenge to the Richmond plan. Toward that end, the California Credit Union League filed an amicus brief in support of the banks. At the national level, the Federal Housing Finance Agency is siding with the banks, threatening to withhold credit from Richmond if it pursues these takings. Reportedly, other municipalities are toying with a similar strategy, including, according to Occidental College professor Peter Dreier, Seattle, San Francisco, and smaller cities in California and New Jersey.

Nonprofits are lining up behind Richmond, but not necessarily the big, well known nonprofits active in the foreclosure arena.  Richmond’s nonprofit supporters include a bevy of labor unions, typically affiliates of the Service Employees International Union (SEIU); a helping of community organizing groups such as the PICO National Network and National People’s Action; and grassroots groups such as the Home Defenders League.

The silence on the Richmond strategy is perplexing, and it isn’t because nonprofits are strangers to the use of eminent domain. For example, in Philadelphia, one CDC has a long history of working with the city to use eminent domain to acquire abandoned and unused side yards and turn them over to adjacent property owners. Promoting the roles of land banks for urban revitalization, the Local Initiatives Support Corporation has recommended reforming laws so that municipalities can more effectively use eminent domain as a tool in urban redevelopment.

One of the most well known examples of neighborhood revitalization in the U.S. was premised on the use of eminent domain. In Boston in the 1980s, the Dudley Street Neighborhood Initiative developed a community plan aimed at fending off speculators.  Based on the plan, the city granted DSNI eminent domain power to take over much of the vacant and abandoned property in a 60-acre part of the neighborhood called the “Dudley Triangle” to ensure community ownership and control.

Note, however, that both the Philadelphia and Boston examples largely involved the use of eminent domain on vacant land and property. In the Richmond example, the eminent domain strategy is to protect existing occupants. What makes it controversial, and perhaps what explains the reluctance of many nationally prominent nonprofits to take a stance on the Richmond plan one way or the other, is that it challenges an entire sector, the banking sector, and the way it protects mortgagees and investors over the interests of homeowners. It says to banks and investors that the nominal value of the mortgage isn’t real when property values have sunk, like those in Richmond. To expect homeowners to pay a mortgage value that is significantly more than the property is worth makes no sense, but to displace those homeowners is destabilizing to the community. Sometimes, taking a stand in favor of the lower-income households typically served or represented by groups like ACCE or PICO means having to challenge the position of other sectors of the economy.

McLaughlin views herself as a community activist, credits a community organization with inspiring the high profile policy she and the city are pursuing, and is standing up to Deutsche Bank, Wells Fargo, and Chevron. Gayle McLaughlin could set the standard for the kind of mayoral candidates that nonprofits should support.