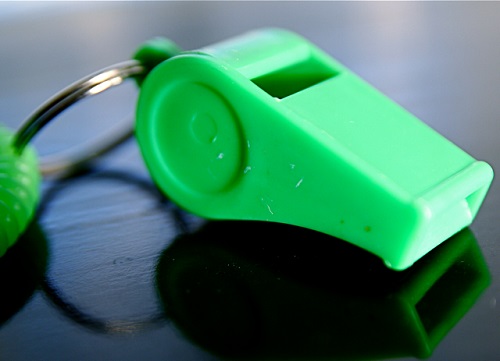 March 18, 2015; Permanent Mission of the United States of America to the
United Nations and Other International Organizations in Geneva

But because the Council is an entity created and populated by member governments, what it says and does about human rights and democratic values is important. The draft resolution on the protection of whistleblowers and the accompanying explanatory report are well worth reading for the depth of the critique of current whistleblower protections.

The resolution is also worth noticing because it coincides with a “side event” held at the UNHRC28 conference in Geneva (actually, the 28th regular session of the United Nations Human Rights Council). Among the presenters was Julian Assange, speaking on a video link from his current location in the Ecuadorean Embassy in London.

The program’s speakers devoted a lot of attention not just to Assange, who was on the panel, albeit on a screen, but also to Edward Snowden. Although the draft resolution doesn’t directly reference Assange, it does specifically reference Snowden, calling on the U.S. to allow Mr. Snowden “to return without fear of criminal prosecution under conditions that would not allow him to raise the public interest defense.” Some reports suggest that Snowden wants to return to the U.S., as was reported by The Intercept’s Glenn Greenwald, but his concerns about his ability to get a fair trial keep him away—for the moment, in Moscow.

Former French judge Eva Joly, now a member of the European Parliament representing the Greens, called for the UN to set up a foundation to compensate whistleblowers for the sacrifices they have had to endure as a result of standing up against powerful governmental authorities and suffering their wrath. Joly’s suggestion is not without merit. Whistleblowers in Western countries do suffer for their public service. While Snowden cools his heels in Putin’s Russia away from friends and family, other whistleblowers have also suffered for their willingness to speak out against government abuses. Think of John Kiriakou, the whistleblower who revealed such U.S. torture practices as waterboarding as government policy. The Nation’s Jon Weiner suggests  that Kiriakou should be compensated for his two years in federal prison. Even though Kiriakou has been released, he is under home confinement for the remainder of his sentence and undoubtedly has much in the way of personal and financial losses to recover from his Espionage Act trial and conviction.

Interestingly, only a few days ago, a U.S. government representative weighed in. Ambassador Keith Harper, the U.S. Representative to the Human Rights Council, delivered a brief statement to the assembled UNHRC participants in which he spoke up for protecting civil society organizations against repressive and retaliatory actions by their host governments.

“Unfortunately, far too many governments are trying to suppress the voices of members of civil society at the Council and the UN more broadly,” Ambassador Harper said in his prepared text. “Acts of reprisal are happening, and they are simply intolerable.”

Harper made it clear that he was talking about human rights defenders who fear that when they speak out or attend programs like UNHRC28, they face personal reprisals and threats to the safety and well-being of their family members and organizational colleagues. Specifically, Harper referenced the “grave human rights and humanitarian situation in South Sudan” and commended a number of organizations, including some from that region, for attending the UNHRC meeting.

Harper might have also singled out more powerful nations like Vladimir Putin’s Russia, where critic Boris Nemtsov was killed on a bridge near the Kremlin just days before he was going to release a report on Russia’s role in the Ukrainian warfare. Nemtsov joins Anna Politkovskaya and Natalia Estemirova, two other watchdogs who were killed for being dissidents. South Sudan may a horrible place for whistleblowers and dissidents due to the chaos of its violent civil war, but the killing of Yeltsin’s former deputy prime minister in the middle of Moscow was an example of repression of whistleblowers and dissidents in the developed world.