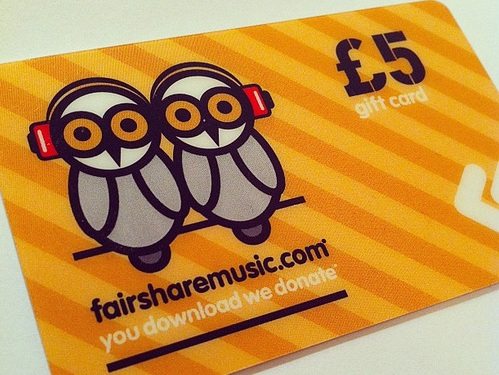 With the tagline, “You download, we donate,” the U.K.-based startup FairShareMusic is attempting to harness music lovers’ desire to download tracks online to fuel philanthropic giving. The company calls it “feelgood downloading.” Here’s how it works: A user creates an account and selects their favored charity. Then, each time that user downloads a song, FairShare donates 50 percent of their net profit on the download to the selected charity. FairShare makes a big deal of touting that 50 percent figure, but it’s important to note that it’s not 50 percent of the total cost of the download, but 50 percent of FairShare’s take. The actual amount donated to charity could be as little as four percent of the total purchase, as the company still needs to pay the music industry’s assorted pipers, including the record label and publisher.

As of now, the major limitation on FairShareMusic from a philanthropic standpoint is that a user may only pick from one of 18 major U.K. charities, so while that may work out well for those who wish to support the likes of chosen nonprofits such as Oxfam or the British Red Cross, those who are more interested in sending funds to smaller, local charities will find that they don’t have the option to do so. However, if FairShareMusic takes off, it isn’t hard to imagine that the model could be expanded out to include a much greater number of charity beneficiaries. It’s also worth noting that FairShare may come with the ancillary benefit of encouraging legal music downloads—the kind that struggling artists depend on.  –Mike Keefe-Feldman