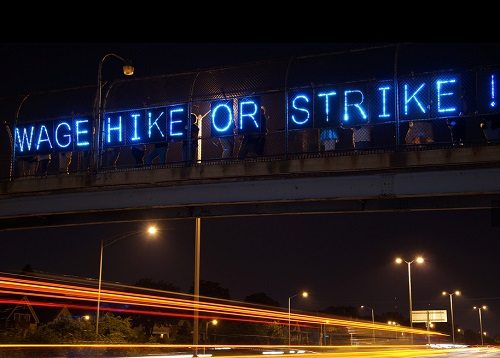 This holiday season is shaping up to be memorable—historical, even—in its loud and constant labor activism for low wage workers. This is being consistently linked to the growing wealth divide with a renewed focus on the economy, which has grown even more skewed post-recession. Have people had enough?

On the heels of protests by workers at Walmart, thousands of fast food workers in hundreds of cities across the United States walked off their jobs on Thursday to protest for a higher minimum wage.

The protest demand is for $15 an hour, as contrasted with the federal minimum wage of $7.25. Ms. Magazine says “seventy-three percent of all front-line workers are women, and 43 percent are black or Latino. Fifty-two percent of fast food workers rely on public assistance because their wages are too low to survive on…Meanwhile, the CEO of McDonald’s raked in about $13.8 million in fiscal 2012, an estimated 737 times what the average fast-food worker earned.”

Fifty-three members of Congress, meanwhile, sent a letter to the CEOs of major fast food corporations urging them to raise wages.

“Too many hard-working families are being forced to depend on poverty-level wages,” read the letter. “Paying fair wages and putting more spending money in the hands of consumers will strengthen our economy.”

This is, of course, a searingly obvious point.—Ruth McCambridge