Fifty Years after the March on Washington: Nonprofit Leadership on the Legacy of MLK 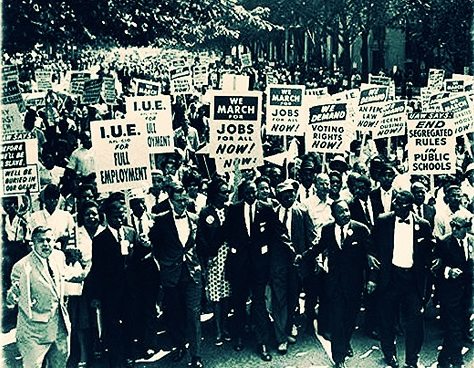 It’s the evening before the 50th anniversary of the March on Washington, at which Rev. Martin Luther King, Jr. inspired the civil rights movement with his “I have a dream” speech. On television, the most visible face speaking about the 50th anniversary march is the Rev. Al Sharpton, the civil rights activist who maintains his own nonprofit advocacy arm, the National Action Network, and has crafted a new career as a regular political commentator with his own show on MSNBC. Occasional interviews pop up with Congressman John Lewis, who was with Rev. King at that march. Fifty years ago, he spoke just before King’s historic oration, and, as some know, is a hero to the civil rights movement, having taken an absolutely brutal beating at the hands of police and thugs in Selma, Alabama.

Washington Post columnist Valerie Strauss expresses frustration about the question frequently posed in interviews asking what Rev. King would do were he confronted with the issues of today. What would he have said or done about the sequester, about poverty, about public schools and school choice, or about healthcare reform? She cites historian Taylor Branch, whose only response is the same one he gives for those asking how one should commemorate Martin Luther King Day: “Ask yourself how you can solve problems…figure out how to bridge the gaps between people by raising questions. That’s what King did.”

For the purposes of Nonprofit Quarterly, we ask what the 50th anniversary of the March on Washington inspires nonprofits to do. Civil rights, in our view, is a core value of the nonprofit sector, even if nonprofits’ specific prescriptions might differ. So we took a quick tour of the websites of some national leadership groups to see what jumped out at us with specific connection to this historic event.

On the Independent Sector website, there’s nothing visible that’s specifically connected to the 50th anniversary, but it is noteworthy that IS will award its 2013 John Gardner Award to Connie Rice, one of the founders of the Advancement Project. A respected multi-racial civil rights organization founded in 1999 by civil rights lawyers to pursue community-based solutions (including litigation), the Advancement Project has been involved in a major way in the civil rights issues facing the country right now. For example, in the wake of states enacting voting restrictions after the Supreme Court’s decision invalidating part of the Voting Rights Act, the Advancement Project filed suit against North Carolina’s action to eliminate same-day voter registration, reduce early voting, and insert controversial voter ID requirements. Addressing the issues highlighted in the trial of George Zimmerman for the killing of Trayvon Martin, such as the stand-your-ground law and racial profiling, Advancement Project co-director Judith Browne Dianis was visibly involved with the Dream Defenders protests at the Florida statehouse in Tallahassee. It means something important for IS to single out a civil rights organization leader for the Gardner award.

There is nothing specifically addressing the anniversary of the march on the National Council of Nonprofits webpage, but the Council’s public policy agenda has great meaning for this event. The original march on Washington as conceived by Rev. King was a march “for jobs and freedom.” Despite the jobs-jobs-jobs statements of national politicians, it is all too evident that job creation is hardly a top priority on politicians’ public policy agendas. But job creation and economic development is one of the top priorities of the policy agenda of the Council. It’s recognition that economic development and job creation aren’t extraneous to nonprofits, somehow ranking lower than fixing nonprofit contracting issues or fighting off changes in the charitable deduction. At the time Rev. King led a quarter-million people to the National Mall, the white unemployment rate was less than five percent, but the black unemployment rate was 10 percent. Half a century later, the white seasonally adjusted unemployment rate is 6.6 percent, but the black unemployment rate is almost double that at 12.6 percent, according to information from the Bureau of Labor Statistics. For the period from 1963 through 2012, the average annual unemployment rate for whites has been 5.1 percent but 11.6 percent for blacks. At least the Council knows that the most important thing that would boost the nonprofit sector (and charitable giving) is a healthy economy with widespread availability of decent-paying jobs. That was Rev. King’s explicit agenda for the march in 1963, a condition that has gotten worse rather than better over the decades.

Maybe people forget, as Case Western Reserve University historian David Hammack has pointed out, that “the growth of the nonprofit sector can be traced to the civil rights movement of the 1960s.” Speaking out on those racial disparities that still plague this nation fifty years after Rev. King gave his “I have a dream” speech is fundamental to the nonprofit sector on the anniversary of the March on Washington, in the activities that will follow the march, and always.—Rick Cohen