Fill out Your “March Madness” Brackets for a Charitable Windfall? 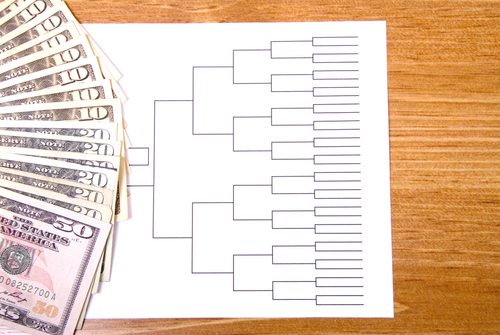 In the world of college sports, yesterday was “Selection Sunday.” The teams that will compete in the NCAA Basketball Tournament, often described with the “March Madness” tagline, have now been revealed and, across the U.S., countless office pools have now begun. Participants are eagerly filling out their tournament brackets, predicting who will win each game when the field is narrowed down from a wide pack of 68 to the one eventual winner. In many cases, these pools come with an entry fee; while we are sure that there are some high rollers out there, in most cases, a buy in of about $5 is typical for such pools. Depending on the state, participating in an NCAA Basketball Tournament pool with any exchange of money may be illegal.

Be that as it may, even in states where this annual tradition is considered illegal sports gambling, few people seem to be deterred. Might some of the money flowing into these “March Madness” pools be directed to charities? Instead of the winner taking all, the winner could give all, or maybe most, to a favored nonprofit cause or program. A case in point is ESPN’s ProBueno Charity Pickem. In this contest, according to a press release from ProBueno, contestants fill out an NCAA bracket for $5 and the winner gets to donate 50 percent of all entry fees collected to a desired charity (while the second place contestant gets to assign 30 percent of the pool to another charity and the third place winner assigns the remaining 20 percent to a third charity).

What makes this proposition a bit dicey is that, at least in states where betting on sports in this way is illegal, a charity cannot (legally) publicly affiliate itself with any such contest. If one were to set up an NCAA tournament pool to benefit charity, one might find it necessary to donate the funds to the charity of the winner’s choice without mentioning to the charity that an NCAA tournament pool had anything to do with it. After all, if one attached a note to such a donation saying, “This is from our illegal March Madness pool,” the charity should, in following the letter of the law, refuse to accept that donation.

But since everyone knows that half of the country, give or take, is ignoring laws about betting on sporting events when it comes to the NCAA basketball tournament, perhaps it would be better to acknowledge this reality and try to harness it for some social good. Would any intrepid state legislator care to propose a carve-out for low-stakes betting on the NCAA tournament, along the lines of the ProBueno Charity Pickem, in cases where all or perhaps a majority of the winner’s proceeds will be given to charity? –Mike Keefe-Feldman