Fired But Still “Stoked” GOOD Staffers Announce Their Own Publication 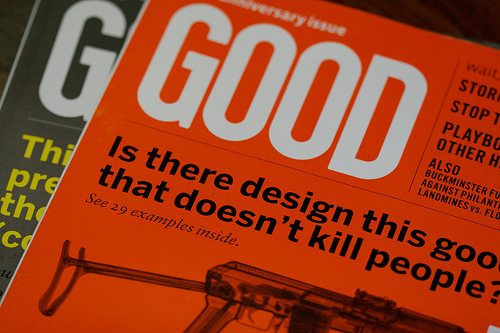 Taking very little time to regroup, six editorial staff members from GOOD Magazine, including executive and managing editors who were fired late last week and two staff members that took a severance package, have announced they will put together their own publication, although likely as a “one-off.” The firings themselves were the topic of much discussion in the last few days because of the way in which they were done. Apparently not the result of financial difficulties, but a matter of strategic choice, the six editorial staffers were fired at the same time that a video showing them as a part of the happy family at GOOD was posted on the magazine’s website.

For an organization that has branded itself as positive and solutions oriented, the stories circulating about the firings and what preceded them appear a bit counter brand. Here is one from Poynter: “One three-hour meeting in March stands out to several staffers as the moment they realized GOOD’s days as a traditional publication were probably numbered. That’s when the owners presented their most thorough refinement of their ideas. At the end of the presentation they showed a slide with an org chart, and [managing editor, Megan] Greenwell wasn’t on it. ‘I burst out laughing and said, ‘Max, I’m not on there,’ Greenwell recalls. ‘He said, ‘Oh man, that was a total oversight, it was a mistake.’ The meeting didn’t go well anyway. The staff, defensive about what they saw as ownership devaluing their jobs, were asking tough questions that bummed out the owners so much Schorr sent an email to staffers saying he’d been hoping for a lot more ‘Yes, and’ responses than the ‘No, but’ ones he was receiving.”

“They always wanted us to be more stoked,” Greenwell said.

The strategic shift GOOD will make will likely unfold clearly in the near future but Ben Goldhirsh, one of the co-founders, is quoted in this Atlantic wire article as writing, “Frankly, it’s easier to make them [layoffs] when financial pressure is the catalyst. But that wasn’t the case here. This was about the direction of the business and the path to manifesting the very exciting potential ahead.” His letter concluded, “I’m really proud that we made the tough decision here, have put the turmoil behind us, and I’m so stoked about all that lies ahead.”

The thing is that the energy of “stoked” may not be owned or easily turned off and so it will be interesting to see what these staffers choose to do together as they move on.

The editors made their announcement on Tumblr. –Ruth McCambridge