Editors’ note: This article from the winter 2017 edition of the Nonprofit Quarterly, “Advancing Critical Conversations: How to Get There from Here,” was adapted from “Examining the Role and Diversity of Fiscal Sponsors in the Nonprofit Sector” (Nonprofit and Voluntary Sector Quarterly 46, no. 3, 2017). With this article, the Nonprofit Quarterly is proud to launch a new, more formal partnership with Nonprofit and Voluntary Sector Quarterly (NVSQ). NVSQ is a peer-reviewed, multidisciplinary academic journal focused on nonprofit sector research, and NPQ has adapted many of its articles for practical use over the years. This has created a rich, two-way conversation via a research-to-practice and practice-to-research bridge involving nonprofit leaders, academics, and “pracademics.” The formalization of this practice on the part of both journals is a reflection of our joint dedication to keeping the traffic on this bridge moving freely.

While there are many nonprofit entrepreneurs with plenty of energy and fresh perspectives eager to enter the nonprofit sector, the start-up stage can be an immensely challenging and vulnerable time for an emerging organization. The precariousness of this stage demonstrates the need and value of an accommodating infrastructure that can assist and nourish emerging nonprofits as they attempt to create greater stability. In this article, we focus on one such supporting infrastructure: fiscal sponsorship.

The Challenge of Starting and Operating a New Nonprofit

The United States’ nonprofit sector has long engaged the activities of millions of individuals—and every year, a multitude of new nonprofit groups and organizations are being formed and launched. However, the exact number of new nonprofits is difficult to pin down. The steady flow of new entrants clearly suggests that the nonprofit sector is both attractive and accessible to individuals wanting to initiate the process of starting new nonprofit activity, usually by founding a new nonprofit organization. As noted by nonprofit management and philanthropy expert Peter Frumkin, the nonprofit sector represents a highly appealing place for people wanting to take a chance to make a difference: “Almost anyone with an idea or vision can found a nonprofit or voluntary organization quickly,” because of the sector’s low entry barriers. However, Frumkin adds, moving from the idea stage to actually operating and maintaining a new nonprofit venture is a much more challenging endeavor.1 Consequently, as Susan Kenny Stevens has commented, the earliest stage of new nonprofit ventures is not just highly time-consuming and demanding of ample commitment from the nonprofit entrepreneur but also the most fragile stage in a nonprofit’s life.2

Organizational researchers have long recognized this fragility by pointing to the problems associated with newness as well as smallness, and the vital importance for new and emerging ventures to attain a certain degree of stability—for example, securing an input of vital resources and building an ability to manage and utilize such resources in order to overcome the vulnerabilities emanating from these liabilities.3 In his seminal essay “Social structure and organizations,” Arthur Stinchcombe painted a highly compelling picture of the steep challenges facing emerging organizations.4 He particularly underscored the vulnerability facing such organizations, which starts from the point at which individuals attempt to explore and implement ideas and to search for resources to propel the idea forward. Stinchcombe’s essay especially emphasized how new organizations suffer a heightened risk of failure because entrepreneurs must engage in so many vital activities more or less simultaneously, which often ends up being an overwhelming task.

As a consequence and as a general rule, anyone trying to create a new organization must find ways to handle what Stinchcombe refers to as the “liability of newness.”5 In this context, fiscal sponsors appear to represent a potentially vital capacity for fledgling nonprofits by offering a support infrastructure to handle some of the burden associated with being a start-up.

What Is a Fiscal Sponsor?

Although there is no one commonly agreed-upon definition of a fiscal sponsorship, the principle is essentially understood to be the same across the board. The National Network of Fiscal Sponsors defines fiscal sponsors as “…nonprofits that advance the public benefit by facilitating the development and growth of charitable, mission-driven activities;”7 from the perspective of the nonprofit entrepreneur, a fiscal sponsor offers an opportunity to have a formal legal home without having to spend significant time and resources to incorporate a new public charity. In other words, fiscal sponsorship is a way for individuals to launch and test new ideas without having to obtain tax-exempt status or build a full-fledged organization. The fiscal sponsor not only helps to provide administrative services and oversight but also assumes some or all of the legal and financial responsibility for the activities of the nonprofit entrepreneur.

From a theoretical perspective, fiscal sponsors help establish the stabilizing conditions essential for emerging nonprofits to evolve. However, fiscal sponsorship is not just beneficial to the emerging entity but is also viewed as having broader and more long-term advantages. As noted by Jonathan Spack, “…fiscal sponsorships can be a real boon to the fluidity, innovative capacity, and diversity of the community-development and nonprofit sector.”8 Moreover, due to the concerted nature of fiscal sponsorship, it can serve as a valuable collaborative learning mechanism among nonprofits, and potentially as a mechanism to pool and coordinate scarce resources in a more efficient manner. Still, using a fiscal sponsor is not without cost. For example, many fiscal sponsors expect to be compensated financially for their services. Also, although the nonprofit entrepreneur may be officially in charge, he or she never retains full autonomy and agency of the program/project as long as the relationship with the fiscal sponsor remains. In addition, being a fiscal sponsor generates transaction as well as administrative costs, and depending on how many new and emerging entities are being housed by the sponsor, the demand for attention and support could potentially become a distraction and perhaps even induce mission creep.

We now briefly outline the different models, based on a summary provided by Colvin:

When we decided to investigate the basic questions of who and how with regard to fiscal sponsorship, we were surprised to find that fiscal sponsors have so far received very little attention from the nonprofit research community.

As noted by Spack, “Because fiscal sponsorship is by definition a behind-the-scenes service, it is often under the public and philanthropic radar.”11 There is certainly some awareness of fiscal sponsorship in the research community. For example, Kirsten Grønbjerg, Helen Liu, and Thomas Pollak highlight how fiscal sponsors are one source contributing to the “dark matter” of non-IRS-registered nonprofit entities.12 Joanne Carman describes the promise of community foundations as fiscal sponsors for community development.13 And Nancy Kinney and Mary Carver discuss urban congregations as potential—if limited—incubators of emerging new service organizations.14 However, no research has directly addressed the characteristics of fiscal sponsor organizations—which in turn has likely contributed to the impression that although fiscal sponsors exist, currently operate, and thus have an impact on the nonprofit sector, they are not well recognized or understood. 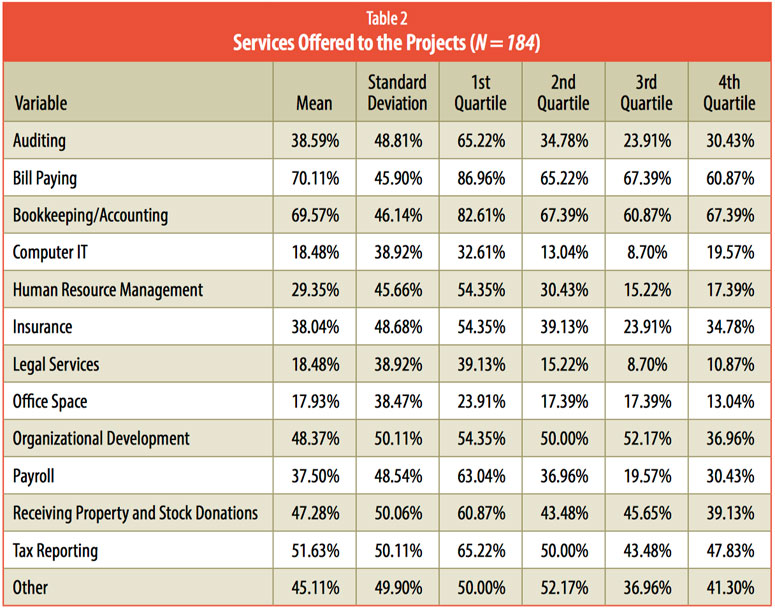 Bill paying (70 percent) and bookkeeping/accounting (70 percent) are cited as the top two most-often-provided services. Tax reporting (52 percent) is also cited more than 50 percent of the time. In reviewing the services offered, five of the top ten (auditing, bill paying, bookkeeping/accounting, payroll, and tax reporting) are accounting-related services, consistent with the notion that a primary function of fiscal sponsors is to provide these to projects. Perhaps not surprisingly, the largest fiscal sponsors are more likely to offer the greatest range of services to projects.

Overall, we identify the following takeaways with implications for the nonprofit sector:

The Nonprofit Quarterly (NPQ): If fiscal sponsorship is the answer, what is the question?

Dan Neely and Fredrik Andersson: A frequent complaint coming from the nonprofit community—funders in particular—is that there are too many new nonprofits. Notwithstanding the merit or lack thereof of this claim, should an eager budding nonprofit entrepreneur always and swiftly obtain 501(c)(3) status for his or her nonprofit venture? While fiscal sponsorship does not offer a definitive answer, it illuminates a viable and valuable option. The problem is not too many new nonprofit ideas; the problem is how to carry them forward in a way that increases the chance for new ideas to take root and transform into innovations that add real value.

NPQ: Can you talk a bit about what might disqualify an organization from being a fiscal sponsor?

NPQ: Can you be too big or too small, or too old or too young, for fiscal sponsorship?

Neely and Andersson: The humdrum answer is “It depends.” If one goal of fiscal sponsorship is to provide capacity to fledgling nonprofit entrepreneurs, then possessing such capacity ought to be a key criterion for deciding to become a fiscal sponsor. Whether you are big, small, young, or old are variables likely to impact what type of capacity can be offered, but this does not necessarily mean being young and/or small puts you on the sideline as a potentially excellent fiscal sponsor. Fiscal sponsors are represented by a range of ages and sizes. Indeed, one size does not fit all for organizations wishing to become fiscal sponsors.

Fredrik O. Andersson is an assistant professor with the School of Public and Environmental Affairs at Indiana University-Purdue University Indianapolis.

Daniel Gordon Neely is associate professor in the department of accounting at the Lubar School of Business, University of Wisconsin-Milwaukee.

More about: fiscal sponsorshipManagement and Leadership