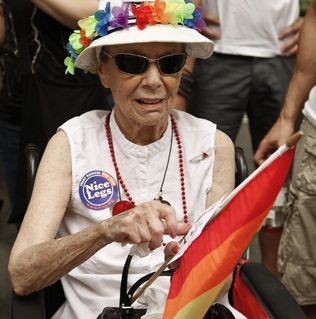 Gen Silent, a documentary about six lesbian, gay, bisexual, and transgender (LGBT) seniors in the elderly care system, will be screened May 17 at the University of North Florida. The film sheds light on the challenges faced by some LGBT seniors who are forced back into the closet, fearful of discrimination and abuse from caregivers and fellow residents. ElderSource, a nonprofit resource center for the elderly in Northeast Florida, has arranged the screening.

The screening is part of an ElderSource initiative that looks at the unique needs of LGBT seniors. Linda Levin, the agency’s executive director, said that elderly gay people are often vulnerable and isolated. “The bullies that were there at the beginning of your life, we’ve found that they’re waiting for you near the end of it too,” added Stu Maddox, Gen Silent’s producer. “And this time you can’t run fast.”

ElderSource surveyed older gay people and discovered shared concerns: lack of family support due to estrangement, limited legal protections, and possible mistreatment from others in nursing homes or communities. These are consistent with the findings of a national online survey of LGBT older adults. A majority of the seniors surveyed believe that staff of long-term care facilities would discriminate against those of them who are open about their gender orientation. More than half feared that staff or other residents would abuse or neglect them. Some said they were mistreated in such facilities.

Seniors face many challenges as it is, especially in a society that glorifies youth and shuns aging. It is all the worse for LGBT folks who may have to deal with homophobia and abuse as well. –Erwin de Leon