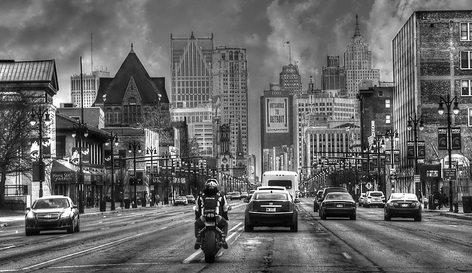 The Ford Foundation has ratcheted the biggest public-private partnership in U.S. history up another notch by pledging an additional $10 million in grants to the City of Detroit for 2015. That is, according to the Detroit News, on top of its initial $125 million “Grand Bargain” commitment to the city last year.

The foundation—based in New York, but the namesake of the man who put the motor city on the map—made the largest donation to the Grand Bargain, part of Detroit’s bankruptcy plan to shield the city-owned Detroit Institute of the Arts and bolster city pensions.

The foundation told the News that the new pledge is “about seizing the momentum created by the bankruptcy resolution and focusing on the next chapter in Detroit.” Much of the funding will pay for seven community-based efforts focused on boosting civic engagement.

The foundation operated locally around Detroit from its founding in the 1930s until 1950, when it expanded to become national and international. Today, it’s the second-largest foundation in the United States and has made over $16 billion in grants and loans. But, as reported by the Detroit News, “for nearly 30 years, Ford Foundation ties to Michigan were strained,” and the Foundation was criticized for neglecting the interests of its birthplace.

In 2005, the state investigated the foundation, looking at its “thin record of giving to its hometown and state.” Between 1998 and 2005, the foundation’s annual grants to Michigan charities totaled less than $1.5 million a year, while in 2001, the Ford Foundation granted $593 million worldwide. Spurred by the investigation, the foundation has made grants to charities and initiatives in Detroit and Michigan in the tens of millions of dollars since 2005, culminating in the $125 million to the Grand Bargain as well as another $14.75 million in grants to Metro Detroit.

The News reports, however, that although “the Ford Foundation provided a substantial amount of grants in Metro Detroit from 2008 to 2012 [about $100 million], three other Michigan-based foundations ranked as the top three givers for the area….” The Kresge Foundation, started nearly 100 years ago by the founder of the five-and-dime chain that eventually became Kmart, granted more during the same period, as did the Community Foundation for Southeast Michigan and the Battle Creek-based W.K. Kellogg Foundation.

Some observers interviewed by the paper credit Darren Walker, Ford’s new president, for its growing role in investment in Detroit since he arrived in 2013—not just for the Grand Bargain, but in other rounds of grant making as well, citing his background in community development and civic engagement.

Ford’s recent interest in community-based advocacy and civic engagement is critical for Detroit, battered as it is by the economic pressures of global competition and the Great Recession. But the trend is one happening all over America, as funders recognize the importance of advocacy and capacity-building for grantees seeking to effect systemic change.

The president of the Council on Michigan Foundations told the News that the impact of the $125 million is “greatly magnified when you think of the key indicators that Detroit is ready for business. It’s a good place to invest. The challenges are not over. That’s why you see this new investment…we have a long way to go.”

The paper reports that the Foundation met with Detroit grantees in December to talk about what needs to be done next, with discussion centered on engagement and problem solving, being more inclusive in the planning process, and better understanding the issues. The Economic Justice Alliance of Michigan, for example, received a Ford Foundation grant to create a coalition of community organizing groups to address inequality. In turn, the Alliance is supporting five smaller, community-based organizations to train organizers and develop a community-based advocacy effort. The goal is to improve community engagement and demonstrate that local people are being encouraged to participate in developing solutions.—Larry Kaplan