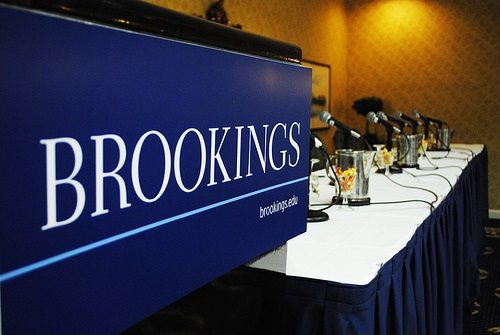 In an impressively researched article in this past weekend’s New York Times, Eric Lipton, Brooke Williams, and Nick Confessore outlined how foreign countries, through moneys provided by their governments, have funded ostensibly nonpartisan nonprofit think tanks in the U.S. In doing so, these sovereign nations are purchasing the respectability of nonprofit think tanks to pursue and promote policies in their national interests. Among the examples Lipton and his colleagues cited are these:

There are several very disturbing elements to this story that should be a concern for all nonprofits.

First, because these think tanks are 501(c) organizations, the public disclosure of their funding relationships with foreign governments may be difficult to spot in formal documents such as Form 990s. For example, on the CSIS website, there is a list of foreign governments that have provided funding to the organization, but without funding amounts, dates, or the specific projects or initiatives they may have supported. There is nothing in the latest CSIS Form 990 posted on the GuideStar website identifying or describing any foreign government funding of the organization. One would think that funding from other sovereign nations might be something that should be a matter of public disclosure.

It goes further than just funding by governments. For example, the Atlantic Council also received money from the fortune of Bahaa Hariri, the eldest son of assassinated Lebanese Prime Minister Rafik Hariri, to establish the Council’s Rafik Hariri Center for the Middle East. Lipton and his coauthors suggest that the influence of the Hariri family became clear when an Atlantic Council staff member described the Egyptian military’s overthrow of the Morsi government as a military coup, prompting a call from Bahaa Hariri; four months later, that staff person had left the Council.

While the article highlighted only a handful of examples, an accompanying interactive chart shows funding flows from a large number of countries, including the Democratic Republic of the Congo, Gabon, Oman, Bahrain, Kuwait, Turkey, Serbia, Hungary, Azerbaijan, and Kazakhstan, among others. It isn’t hard to figure out that they aren’t all emulating Norway’s grant to the Center for Global Development, promoting higher levels of U.S. foreign aid and humanitarian relief.

Second, each of the think tanks discussed in the Times article basically averred to Lipton and his colleagues that the funding received from these governments does not influence objectivity and impartiality of their programs and research. Nor do they think that they should be seen as doing lobbying for these governments because of the foreign government funding. Many governments routinely hire top-flight U.S. lobbying firms to advocate for their interests in the U.S., which in itself raises some questions about their probity and about some of the former politicians who have so willingly signed on as their advocates. A recent example is the hiring of former senators John Breaux (D-LA) and Trent Lott (R-MS) by the Russian government-controlled Gazprombank, almost assuredly meant to help deal with current and future sanctions imposed as a result of Russia’s military intervention in Ukraine. Nonetheless, just like politicians who swear on a stack of Bibles that campaign donors don’t influence their policies, the contentions of the think tanks that funding from Qatar, Russia, and Japan are not any more convincing. For foreign governments, buying face-time, influence, and good relations counts when the target is an organization like CSIS, whose board is chaired by former Senator Sam Nunn (D-GA) and includes in its membership former Secretary of State Zbigniew Brzezinski, former Senator Bill Frist (R-TN), former national security advisor to the Ford and Bush I administrations Brent Scowcroft, former U.S. Trade Representative Carla Hills, and Henry Kissinger, just to name a few of the still highly connected former public officials among its trustees.

Third, the funding does put a lie to the notion of the nonpartisan—or, rather, “independent” Washington, D.C. think tank. On many issues of international policy, the nonpartisan politics and political independence of these entities are hard to pinpoint. Just because they qualify as 501(c) organizations does not mean that they are free of the influence of funders, whether national governments, corporations, or corporate trade associations. They may not be compelled to register as foreign agents, as some of the lobbyists have had to, but they may well be following agendas and programs that help further the national interests of the sovereign nation funders. Even if these think tanks are not unduly influenced, the mere presence of millions of dollars from foreign governments with agendas to pursue on current U.S. policy issues, such as Japan’s high priority on the TPP treaty, is important for the public to know about and does chip away at their image of independence, no matter what the think tanks say.

Fourth, what complicates this pattern of foreign funding is the U.S. government’s funding of overseas NGOs engaged in “soft” political activities through entities such as the National Endowment for Democracy. Operating largely on funding provided by the U.S. government through the U.S. Agency for International Development, NED funds organizations in other countries that are seen as promoting democracy, including NGOs in Iran, Ukraine, China’s Xinjiang province, and many others. To the U.S., funding through NED looks like attempts to build and support democratic values and institutions, but to other countries, it may look like efforts by the U.S. government to underwrite organizations that influence policies in ways that they might not like, but the U.S. government might (though there have been instances of NED support for pro-democracy movements in countries when the U.S. government officially supported the rule of the autocrats these movements opposed).

Overall, however, the importance of this New York Times article is clear. The left might criticize some think tanks as leaning to the right, the right denounces others as leaning left, but there are a number of think tanks whose political leanings might be more appropriately described as potentially influenced by the policies of governments halfway around the world whose interests are their own, not America’s.—Rick Cohen