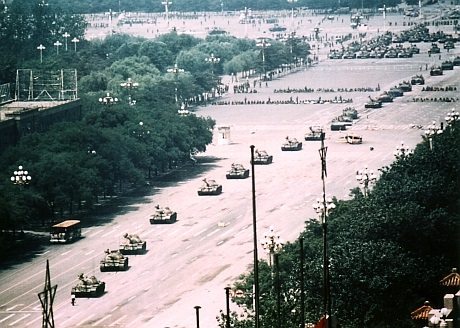 On my wall is a grainy picture of an unknown man carrying a shopping bag standing in front of Chinese army tanks in Tiananmen Square. No one knows who this guy was, 25 years later. If you’ve seen the photos that preceded the iconic shot, the man actually climbed on the lead tank to stop it and kept getting in front of it when the tank tried to circumvent him. The day before, the People’s Liberation Army had shot (or crushed with tanks in some cases) hundreds or thousands of young protesters. No one’s certain how many actually died, since Chinese authorities then and now suppressed coverage and knowledge of what happened in Tiananmen. But “Tank Man” had to have known—he was there—yet he still faced off against the four tanks.

Who he really was has been subject to much debate. Rumors abound, including one that he was a 19-year-old student who was soon arrested and put to death a couple of weeks later. He is impossible to forget, an example of unimaginable courage, and impossible to ignore a quarter century after the Tiananmen Square protests. This young man should be seen as representative of what the voluntary sector is all about, standing up for principle in the face of overwhelming obstacles, not concerned with the obnoxious TED talk self-promotion that absorbs the egomaniacs who are all too prevalent in the U.S. nonprofit sector.

What are American nonprofits and American foundations doing a quarter-century later to honor Tank Man and the thousands of protestors whose actions have been buried and suppressed by Chinese authorities? Note that just this week, a Chinese government spokesperson put a spin on Tiananmen that even the worst of message-controlling U.S. hucksters wouldn’t dare try: “In China there are only law breakers,” Foreign Ministry spokesperson Hong Fei said this week. “There are no so-called dissidents.” Fei acknowledged that the Chinese government is placing tighter controls on the Internet during this time in which people might take actions to commemorate the Tiananmen Square protests, though he contended that disrupting Google and other Internet access were all in accord with Chinese and international law.

Perhaps nonprofits could target and expose the firms that have been hired by Chinese government authorities for mammoth amounts of money to build do PR to create an image of a kinder, nicer China. The Sunlight Foundation revealed that Patton Boggs is among the firms cleaning up on Chinese government money to clean up China’s image. How many Patton Boggs bigwigs sit on the boards of major U.S. nonprofits? These and other firms should be asked to address the meaning of the Tiananmen Square massacres and the actions of the Chinese government now to suppress dissent and deter Tiananmen commemorations.

It may be that an appropriate response for U.S. nonprofits would be to recognize and honor nonprofits that are still taking risks to help the dissidents that the Chinese government says do not exist, such as ChinaAid, which runs an “underground railroad” for Chinese dissidents. It might be even more appropriate for major U.S. nonprofits and foundations to engage their Chinese counterparts in a different kind of conversation. For example, last month, American über-philanthropist Bill Gates challenged rich people in China to give more to charity and philanthropy, suggesting that there was a “philanthropy gap” between the U.S. and China. According to Yanzhong Huang writing for The Diplomat, the less than overwhelming philanthropic generosity of China’s rich may be a cause in the “social capital (i.e., trust) deficit” faced by Chinese philanthropy. Perhaps it is the continuing silence of China’s top income classes, unwilling to challenge the continuing repression of free speech by the government, which chips away at their social capital while they become even richer.

Gates and others are crowing about the new “Giving Pledge”-type commitments they have received from Chinese oligarchs such as Alibaba’s Jack Ma to make big donations to philanthropy. The Economist and others have referred to Ma as “China’s Carnegie” as a result of his philanthropic pledge. In a nation where free speech is suppressed—as in the history of the Tiananmen protests and the courage of that young man in front of the row of tanks—the notion that Ma might become “China’s version of the charitable Bill Gates” is truly ironic. Where there is no free speech, where “dissidents” are written out of existence, where protests that led to the deaths of thousands are excised from public discourse, philanthropy that aims to do good works misses the most important philanthropic good work of all: the ability of people to speak, think, convene, and act.—Rick Cohen