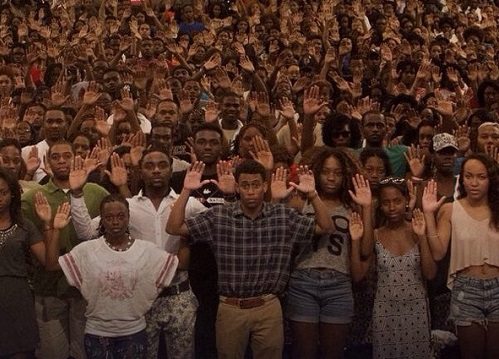 Led by the Deaconess Foundation of Missouri, members and allies of the Executives’ Alliance to Expand Opportunities for Men and Boys of Color released a statement on Monday asking for an observance of civil liberties in response to any demonstrations that may occur after the grand jury decision on the Michael Brown shooting. The statement is addressed to local, state, and federal officials.

It reads, in part, that no one wants to see any escalation, and in light of that, “We must create conditions where people can assemble, as is their right, in a manner that is civil and peaceful for all involved, including residents and officers entrusted with maintaining safety.”

The signers described the Alliance as “a growing network comprised of the presidents and CEOs of national, regional and community foundations that engage in a broad array of initiatives and activities to support boys and men of color, ranging from individual programmatic interventions to broad-scale policy change.”

An interesting aspect to this statement is that the Alliance says it has worked closely with the leaders and member organizations of the movement for justice in Ferguson. It asserts:

“Those organizations follow in the footsteps of other great Americans, civil rights patriots who secured rightful freedoms that were long denied. They have engaged leaders from across the nation and the world. They have set forth well-reasoned reform proposals to improve how we manage future situations at the local, state, and federal level. The Executives’ Alliance applauds their efforts and will continue to stand with them.”

The Alliance then made a list of recommendations, which, they say, “echo those from a longer list created by grassroots organizations in Greater St. Louis.”

The statement is signed by a long and impressive list of U.S. foundation executives and their allies, including:

This statement is certainly an unusual, interesting, and significant move for foundations, which have often been unwilling to take public advocacy positions on things other than their own regulatory environment. NPQ hopes to see more from this group in the future on some of the social justice policy issues that underlie the issues surfaced in Ferguson.—Ruth McCambridge

[Full Disclosure: Ivye Allen of the Foundation for the Mid-South is an NPQ board member.]