Founder troubles can plague all kinds of nonprofits. Founders often become founders because they have a combination of charisma and will, and the result can be both highly attractive and highly distressing.

Conservative campaigner Phyllis Schlafly claims she is still at the helm of the Eagle Forum, which she founded in 1972 to successfully oppose the Equal Rights Amendment (ERA). The group has more recently been active against marriage equality, abortion, gun control, and tax increases. But six of 11 of the board members (now dubbed the “Gang of Six”) claim she is out.

Schlafly says she objects to the validity of their decisions to oust her and the president Ed Martin. Making the whole scene more excruciating is the fact that Anne Cori, Schlafly’s daughter, is one of the six board members (rogue, according to Schlafly and Martin) taking the action.

Schlafly has been trying to get her daughter and the other five rogues to resign, as can be noted in the letter below: 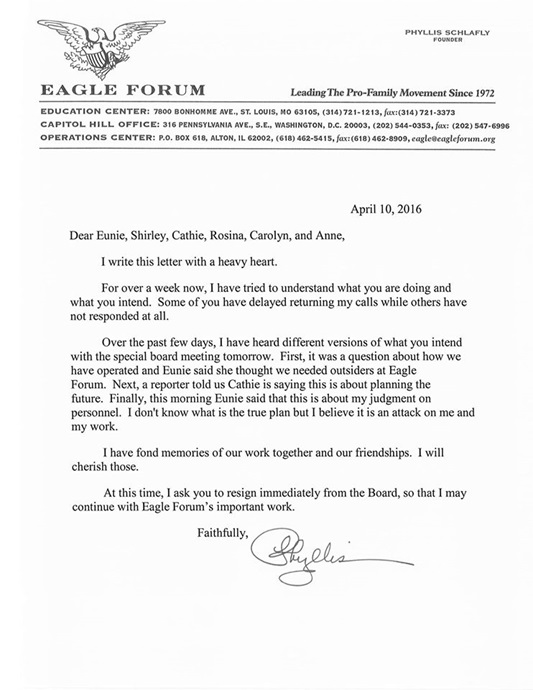 The imbroglio has been blamed on Schlafly’s endorsement of Donald Trump for president in January after high-ranking staff had already voiced support for Ted Cruz. Some believe the 91-year-old was manipulated into making the endorsement, a suggestion some call highly disrespectful.

Schlafly’s decision prompted Cathie Adams, a veteran Eagle Forum member and onetime chair of the Texas GOP, to claim that Trump had capitalized on Schlafly’s old age to earn her support.

“At 91, it is just totally unfair to impose upon someone who has such a beautiful legacy,” Adams said to the Dallas Morning News. “I think this was very much a manipulation. When you’re 91 and you’re not out with the grass roots all the time, it is very much taking advantage of someone.”

Schlafly is reluctant to categorize Adams’s remark as a personal insult. “We have quite a number of our members who are for Cruz. There’s no question about that,” she told Gawker. “When they did that, I didn’t say anything. I didn’t criticize them. I didn’t say they couldn’t do it. I said we have free speech, you can do whatever you want.”

The “rogue board members” deny that the issue at hand is the endorsement of Trump; rather, they claim it’s Martin’s style of management that is in question, and that he is acting as Schlafly’s mouthpiece in order to seize control of the group.

Schlafly made a video to explain her position in which she asserts that the Eagle Forum is still a “terribly important player in the whole political scene.”

“So we’re cooking, and I hope you’re with me all the way,” Schlafly said.

As a trip down memory lane, here are some quotations from the woman in question: