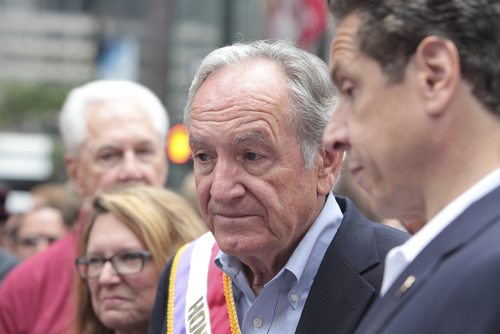 This is part of the text of Iowa Senator Tom Harkin’s final speech from the floor of the U.S. Senate. NPQ doesn’t often draw on press releases or reprint speeches, but in this case, given Harkin’s 40 years in Congress, Harkin’s beautiful and moving statement is worth a detailed read. It’s about a man’s faith in the institutions of American democracy and his appreciation of what this country has given to him and his family, particularly his mother, who came to the U.S. after 25 years living in a small house with a dirt floor and no running water in Suha, Yugoslavia (now Slovenia), and his father who, at the age of 53, with only a sixth-grade education and five children (with Tom Harkin himself on the way as the sixth), received a WPA card in 1939, giving him a job, income, meaningful work, and hope for a better future.

Just as moving were Harkin’s four challenges for his successors, four overriding issues that he thinks need to be addressed for this country to progress—and to rectify longstanding injustices. Because all four of Harkin’s concerns have been addressed extensively in NPQ’s writing, we are reprinting excerpts from his speech here:

“There are four overriding issues that I hope this Senate will address in the coming session. Number one, as I mentioned, the growing economic inequality in America. It is destructive of lives, it slows our progress as a nation, and it will doom broad support for representative government. When people at the bottom of the economic ladder feel the government is not helping them and in fact may be stacked against them, they will cease to vote, or will turn to the siren song of extreme elements in our society. History proves this to be true.

“I don’t have a cookie-cutter answer or solution, but it must include more fair tax laws and trade laws, more job training and retraining, rebuilding our physical infrastructure, and manufacturing. And I believe it must include some things, seemingly unrelated, like quality, free, early education for every child in America.

“The answer to closing the inequality gap must include rebuilding labor unions and collective bargaining. If you trace the line over the last 40 years of our growing economic inequality and put that over another line showing the loss in the number of union workers, they are almost identical. I do not believe it is a stretch to say that organized labor, unions, built the middle class in America, and they are a part of the answer in strengthening and rebuilding our middle class.

“Another part of the answer is raising the minimum wage to above the poverty line and inflation indexing it for the future. We also need new flex-time laws especially for women in the workforce. We need to strengthen Social Security as in Senator Brown’s bill. We need a new retirement system for all workers. Not another 401(k), but a system in which employers and employees contribute, which can only be withdrawn as an annuity for life after one retires, like the Netherlands has. Lack of a reliable retirement is one of the most under reported, unexamined crises on our national horizon, and is a big part of our growing inequality.

“Finally, we must continue to build on the Affordable Care Act. The cost and availability of good health care has in the past widened the inequality gap. We are now starting to close that element of inequality. We need to add a public option to the exchange as another choice for people. And we must continue support for prevention and public health—moving us more and more away from ‘sick care’ to real ‘health care.’

“The second overriding issue is the destruction of the family of man’s only home—planet Earth—through the continued use of fossil fuels. We know what’s happening. The science is irrefutable, the data is clear, the warning signs are flashing in bright neon red: ‘stop what you are doing with fossil fuels.’ We must shift massively and quickly to renewable energy, a new smart electric grid, retrofitting our buildings for energy efficiency, and moving rapidly to a hydrogen-based energy cycle.

The third issue I commend to the Senate for further development and changes in existing laws is the under employment of people with disabilities.

“As you all know, ensuring equal rights and opportunities for people with disabilities has been the major part of my work in the Senate for the past 30 years. We have made significant strides forward in changing America to fulfill two of the four goals of the Americans with Disabilities Act. These two are full participation and equal opportunity.

“First, help states to fully implement the Supreme Court’s Olmstead decision, to more rapidly de-institutionalize people with disabilities and provide true independent living with support services. This will save money, and individuals with disabilities lives will be better and more truly independent.

“Secondly, we must do more on employment of people with disabilities in competitive, integrated employment.

“We get the monthly unemployment figures. Last month unemployment held steady at 5.8 percent officially, but Leo Hindery has better calculations to show the real rate is twice that figure. Also, we know that unemployment among young African-Americans is 11.1 percent.

“But how many of us know that the unemployment rate among adult Americans with disabilities who want to work and can work is over 60 percent?! Yes, you heard me right: almost two out of three people with disabilities cannot find a job. That is a blot on our national character.

“Thankfully, some enlightened employers have affirmative action plans to hire more people with disabilities. Employers are finding that many times these become their best employees—they are more productive, the hardest working, most reliable workers.

“I dwell on this because perhaps I feel I haven’t done enough on this issue of employment for people with disabilities, and we just have to do better. I will say, however, that our HELP Committee passed this year and President Obama signed into law, a new re-authorization of the old Workforce Investment Act, now named the Workforce Investment and Opportunity Act. In the law, there is a new provision I worked on to get more intervention in high school for kids with disabilities to prepare for the workplace through summer jobs, job coaching, and internships…

“The fourth issue concerns the UN Convention on the Rights of People with Disabilities.

“I don’t think anything has saddened me more in my 30 years here than the failure of the Senate to ratify the CRPD. This convention was modeled after our own Americans with Disabilities Act. It has been ratified by 150 nations. It has broad and deep support in our country, supported by the U.S. Chamber of Commerce, the Business Roundtable, veterans groups, every disability organization, every former living President, every former Republican leader of the Senate: Senator Dole, Senator Lott, and Senator Frist. In November, we received a letter of support from the National Association of Evangelicals. I also want to point out that Senator Dole has worked his heart out on this. I hope the next Senate will take this up and join with the rest of the world in helping make changes globally for people with disabilities.”

Speeches by American politicians—no offense—are generally staff-written PR statements, lacking the authentic voice of the politicians themselves. Harkin’s final speech feels like a heartfelt statement of a great statesman whose top priorities were core issues for much of the nonprofit sector.—Rick Cohen