Four Reasons Why NOT to Use Social Media . . . and Why to Use It Anyway

This article is featured in NPQ’S fall/winter 2011 issue. 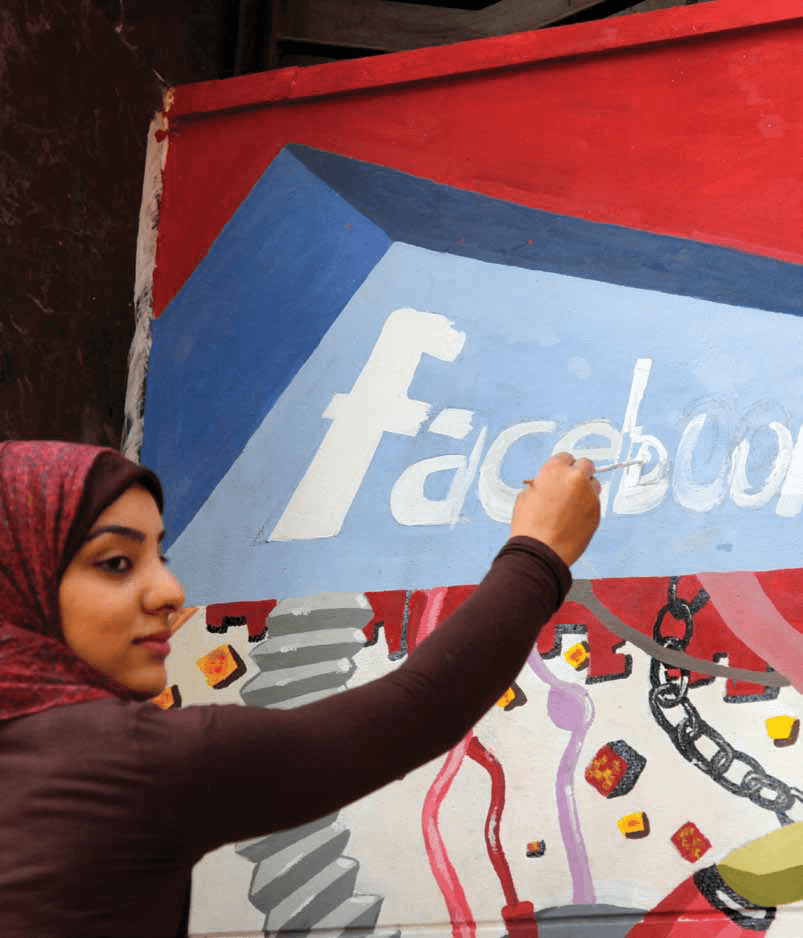 These days, a nonprofit communicator must be quick. Quick to learn new tools, new technologies—and how to appropriately apply them to his or her organization. But over the past eight years, we’ve seen the rise and fall of social media giants like MySpace, Google Buzz, and Delicious. Those that invested their own and their organization’s time and resources into these tools may have felt burned by the social media bandwagon.

Social media can be confusing and overwhelming. At the same time, there is a lot of pressure for nonprofits to embrace social media and engage with donors, volunteers, and supporters using tools like Facebook, Google +, and Twitter. In this article we explore why, why not, and how to use social media to the best advantage of your organization.

Nonprofit communicators are often skeptical—and rightly so—of the new tools out there. Why should organizations shift resources away from what has proven to be successful to this vague concept of the social web? Below are the four most frequent points raised as to why organizations should think twice before heading down the social media path .?.?. and reasons why those points don’t necessarily hold up.

When the Causes application pulled out of MySpace, in 2009, it effectively removed any ability for nonprofits to fundraise using the tool. There were 40,000 nonprofit organizations with profiles on the social networking site at the time. Early nonprofit social media adopters had flocked to MySpace as a way to further connect with their audiences and raise a few extra dollars. They spent time figuring out what Causes meant for their organization, how to use it, and how to raise money on it. And then the tool up and changed, leaving them in the lurch.

What’s to prevent that from happening to other tools, like Facebook, Twitter, or YouTube? Well, nothing, really. Tools come and go. Their population may soar and then plummet without notice. They may change the rules midcourse. That’s the scary part of the fast-moving world we live in today.

That said, we can say with some certainty that social media is here to stay. It will evolve and likely turn into something barely recognizable from the social media we know and use today. The growing mobile culture is already changing the way individuals interact with organizations; nonprofits, in addition to for-profits and public sector groups, must evolve with it in order to keep up with their audiences.

Still, no one, not even Mark Zuckerberg, can guarantee that Facebook will be around in fifteen, ten, or even five years. Nonprofits should invest in the concept of being social organizations rather than becoming stuck on a single tool—or even group of tools—that they use to make that happen. Be open to engaging in online conversation, whatever the tool may be. Use tools that make sense in the moment, and don’t feel that the organization needs to make a long-term commitment to that tool. If the situation changes, be flexible.

Many people think that organizations should use social media because it’s free. But social media management is free like a puppy is free. While setting up a profile on Twitter sites may cost zero dollars, its management requires constant care and feeding. And, unlike a puppy, as you train social media it needs more and more—not less and less—attention. There is a huge opportunity cost: smart managers understand that if they dedicate one or more staff to manage social media, those resources will be diverted from existing work.

So if you know that your e-mail campaigns and your website are working for you, why would you move away from the tried-and-true tools to others that may come and go?

As our communications toolbox grows, it is becoming more and more difficult to determine cause and effect of particular messages and methods. If a homeless shelter posts a photo and a link to donate on Facebook, sends an e-mail, and sends a direct mail donation appeal, it becomes difficult to determine which method will have motivated donors who received all three campaign methods. We can easily see the results of our efforts when a potential donor returns a donation envelope that was mailed to them, clicks on a link in an e-mail, or lands on a donation page on a social media website. And we know the statistics, as demonstrated in figure 1 (below). But what we can’t tell from those statistics is how these messages may build upon one another. A decision made after reading a Facebook post may be acted on when an e-mail reminds a donor. 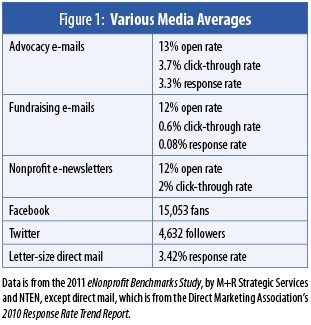 A return on investment may also be skewed during the building period of a social media ?strategy. As a nonprofit builds its social media presence it must start at zero followers and fans. An organization must expend considerable effort just building its numbers. An organization’s Facebook fan page with only 100 fans compared to the same organization’s e-mail list of 10,000 can seem like wasted effort. But social is as social does. Any social profile must reach a sort of tipping point before its fan base can be leveraged. In order to reap the rewards of social media, every nonprofit must put in its time building a base. That can be a difficult pill to swallow, because during that time you may have little participation and low outcomes with respect to your goals. The time it takes an organization to leverage its base depends on how much time and effort it chooses to put into it.

The argument here is that if you build it, the naysayers will come. Providing a Facebook page invites those who don’t think too kindly about your organization to post their negative comments for all to see. There have been some very public examples of this in the for-profit world. Comcast, American Airlines, Southwest Airlines, and Dominos Pizza have all found themselves in a PR crisis because of social media posts. Some of these companies have fared better in the social media world than others, but one thing they all learn is that people—donors, volunteers, supporters—are already talking about them. In other words, the social media tools are not the issue.

A donor may tell a friend about a great mentoring group that she donated to, or a volunteer may take a picture of himself packing grocery bags for a local food shelf, or a client may talk about participating in an English-as-a-second-language class. Social media is merely a tool each one may have selected as a means of expressing his or her feelings. The uniqueness of social media is that it allows organizations to be part of the conversation and respond in ways that it would not be able to do in other forums.

While negative comments are a concern, a bigger concern is lack of participation. Social media is inherently about conversations. If you si