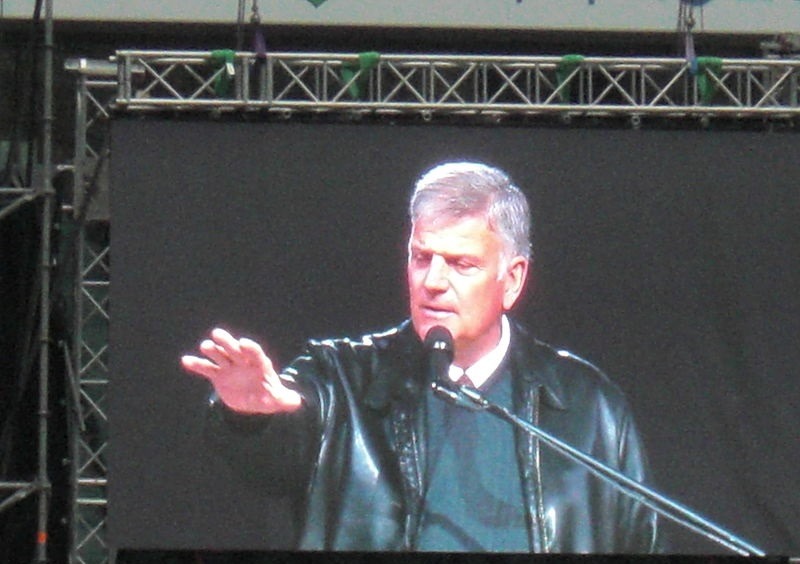 Franklin Graham, son of famed evangelist Billy Graham, has been moved to “help those in desperate need” through his international aid NGO, Samaritan’s Purse, motivated by a fervent belief in the Gospel. Despite his strongly Christian faith-based approach, Samaritan’s Purse does not require the people it assists to be believers. Back home, however, Graham’s position on the roiling controversies regarding Islamic jihad could undermine the international posture of the organization.

Earlier this month, Graham put the following on his Facebook page:

“Four innocent Marines (United States Marine Corps) killed and three others wounded in ‪#‎Chattanooga yesterday including a policeman and another Marine—all by a radical Muslim whose family was allowed to immigrate to this country from Kuwait. We are under attack by Muslims at home and abroad. We should stop all immigration of Muslims to the U.S. until this threat with Islam has been settled. Every Muslim that comes into this country has the potential to be radicalized—and they do their killing to honor their religion and Muhammad. During World War 2, we didn’t allow Japanese to immigrate to America, nor did we allow Germans. Why are we allowing Muslims now? Do you agree? Let your Congressman know that we’ve got to put a stop to this and close the floodgates. Pray for the men and women who serve this nation in uniform, that God would protect them.”

With operations in over 100 countries, Samaritan’s Purse is bound to be working with Muslims who have been victims of war, disaster, disease, and poverty. Some of the countries in which Samaritan’s Purse has worked might be surprised to find themselves grouped among nations whose countrymen would be prevented from coming to the U.S. 75 years ago. Given the tenor of Graham’s comment, the only part missing seems to be a call for internment of Muslims in the U.S., an analogue to the way this country herded some 110,000 Japanese-Americans from the West Coast into camps in the interior of the country.

Graham made his statement in the wake of the killing of five U.S. servicemen in Chattanooga by a 24-year-old Kuwaiti-born man. Although Graham’s posting generated a quick endorsement from Evangelicals for Biblical Immigration, itself an advocate of restricting immigration, others suggested that restricting immigration of Muslims could lead to problems with the resettlement efforts aimed at Christian refugees.

“My fear is that if we say, ‘Muslim refugees shouldn’t come in,’ then it will probably be harder for Christian refugees to come in,” said Jenny Yang, a vice president at the faith-based NGO World Relief. “Our government isn’t going to restrict refugees from Muslim countries, they would restrict the entire resettlement program.”

Alex Mandes, the director of the Immigration Alliance, a coalition of evangelical ministries that are pro-refugee and pro-immigration, added a broader concern than Yang:

“To hear him espouse what he did saddens me because I would hope a man who speaks for the church would speak for the gospel and not give political rhetoric that we hear. […] My biggest hurt is that the church has no better answer than that?”

That’s the real issue—not that restricting Muslim immigration might hurt efforts of faith-based groups to bring Christian refugees to the U.S., but that the notion of declaring all Muslims a danger is simply unjustifiable.

Others have weighed in against Graham’s advice along the same lines as Mandes. “I was so sad when I read the Facebook posting of Franklin Graham,” said Bob Roberts Jr. of NorthWood Church in Keller, Texas, at a gathering on Capitol Hill. “This is not ‘evangelical’ and even less evangelistic. I don’t want American Muslims to think we fear them or that they are our enemies.” Helen Lee, an associate editor at InterVarsity Press, asked, “This is Christian witness?“ Pastor Brian Zahnd of Word Life Church called Graham’s proposal “xenophobia,” and Chick-Fil-A’s general manager for leadership development said Graham’s ideas were “despicable” and the opposite of Christian love.

However, Graham’s ideas aren’t simply one individual’s aberration; others have been floating similar ideas. Senator Rand Paul (R-KY) has called for special treatment and monitoring for immigrants from Muslim countries, and retired Army general and former Democratic presidential candidate Wesley Clark has advocated internment camps for “disloyal” and “self-radicalized” Americans.

Graham’s anti-Islamic statement may harm his own organization’s ability to work in some countries. More broadly, for countries that do not make fine-grained distinctions among American NGOs engaged in humanitarian aid, Graham’s comments could harm their operations as well. Part of the American ethos is inclusion, tolerance, and diversity. Broad-brush statements against an entire religion, uttered by the high-profile leader of a major faith-based NGO, merit condemnation from nonprofits of all types, else one man’s religious xenophobia becomes inadvertently viewed as a more generally supported sentiment among American NGOs.—Rick Cohen

The Stories behind Oxfam’s Withdrawal from 18 Countries