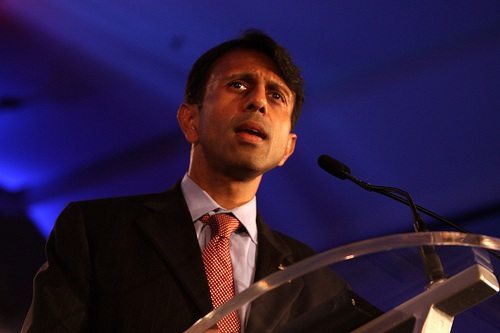 Republican Louisiana Gov. Bobby Jindal, an obvious presidential aspirant, thinks that his political party has boxed itself into being the “stupid party,” a caricature that doesn’t poll well in national elections. If Jindal is right, maybe the party’s stupidity is that it has never succeeded in disgorging itself of some racists that seem to think that the Republicans can win as the “white party” despite the obvious demographics going against that notion.

Nick Baumann of Mother Jones writes about two board members for the Young America’s Foundation (YAF), Ron Robinson (the YAF president) and James B. Taylor. Robinson is also on the board of the organization that gave its name to the Supreme Court decision on political financing, Citizens United, and the board of the American Conservative Union, which runs the annual Conservative Political Action Conference, a topic the NPQ Newswire has explored at times (see here and here).

Robinson and Taylor are two of the three members of the board of America’s PAC, which gave money to the Charles Martel Society in 2004. History buffs undoubtedly know Martel as the Frankish knight who led Christians in defeating Muslim invaders at the Battle of Tours in 732 or 733, preventing “the Moors” from expanding from Al-Andalus into France and other parts of Western Europe. Sometimes the name tells you all you need to know.

Conservative publisher William Regnery II, who the Southern Poverty Law Center (SPLC) calls a “prime mover and shaker in white nationalism”, founded the Charles Martel Society. Taylor was once the head of the National Policy Institute, also founded by Regnery. Baumann cites Heidi Beirich of the SPLC, who points out that NPI and Martel prefer the “more high-brow” description “white nationalist” over “white supremacist,” though for African Americans, the distinction may not be all that relevant (and the same may go for Jews and others who may not see the distinction while reading a headline on a Martel website about “the Jewish Culture of Deceit”).

Times must be tough for white, uh, nationalists. The Charles Martel Society’s latest posted IRS Form 990, for calendar year 2011, shows the 501(c)(3) pulling in $55,188 in contributions and $26,272 in program service revenue for total revenues of $81,460. Meanwhile, it spent $69,260, some of which covered the production and distribution of its regular publication, the Occidental Quarterly. The 2011 total of $55,188 was the lowest level of contributions the organization has received in the past five years, less than half of the $112,029 the Georgia-based nonprofit pulled in 2008. The National Policy Institute, with founder Regnery still on the board, received $101,541 in contributions and $11,768 in program service revenues in 2011, according to its Form 990. Its $101,000 total in contributions was almost five times as much as it pulled in in 2010 and the largest since the $106,040 it received in 2007. John Gardner (no, not the nonprofit hero John Gardner) is listed as the president of the Martel Society and a director of NPI.

The Charles Martel Society and the National Policy Institute are fringe organizations espousing attitudes that most observers would classify as white supremacist. As we well know, the nonprofit sector includes a breadth of organizations and ideologies with room for some that mainstream Americans consider racist or worse. Given that the PAC that Robinson and Taylor direct has contributed to Republican political candidates, the problem for Republicans is how to deal with players like this under their big tent. So long as the Republican Party makes room for highbrow racists and racism, no matter what terminology is used, it will continue to drift toward fringe party status.—Rick Cohen