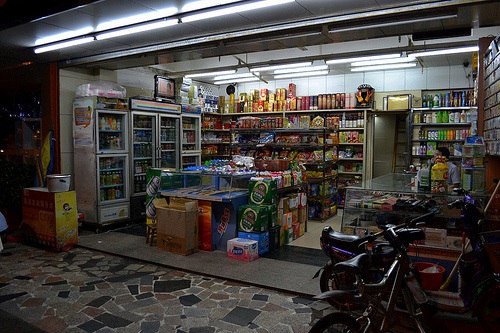 D.C. Central Kitchen, a nonprofit described on its website as “America’s leader in reducing hunger with recycled food, training unemployed adults for culinary careers, serving healthy school meals, and rebuilding urban food systems through social enterprise,” has started a Healthy Corners program to expand the fruit and vegetables offerings in corner stores across the District. The article in the Atlantic reports:

“According to the D.C. Central Kitchen’s calculations, 88 percent of food retailers in the District sell mostly junk food or processed food. Two hundred thousand of the District’s residents live in an area where the closest grocery store is three times further away than the closest fast-food or convenience store.”

The Healthy Corners program allows corner stores to buy produce at lower prices than normally would be the case with smaller fruit and vegetable orders. The program uses D.C. Central Kitchen trucks to distribute food bought from local farms.

As someone who has been involved in this type of project before, I understand the difficulty and reluctance associated with behavioral change. “Farm to Corner Store” was a project that I attempted, with the help of community partners, to get off the ground about six years ago in Flint, Michigan. With one functioning grocery store within the city limits, we were determined to help residents make better food choices—and meet them where they shop.

My experience was very much like the one had at Thomas & Sons in D.C. When I first entered the stores, there were a few apples and bananas, potatoes and onions, but that was all. The owner of Thomas & Sons, Jae Chung, was reluctant to stock things like tomatoes, which would often go bad with no one purchasing them. “Unlike Cheetos or Oreos, vegetables rot.” The Healthy Corners program provides refrigerated cases for vegetables and replaces any items that go bad at no extra cost.

The other issue? People are not sure what to do with fresh items, especially if all they have ever known is convenience food. Working several jobs and taking care of a family are time consuming, and learning how to prepare fresh foods and worrying that foods may spoil are stressors that individuals grocery shopping at corner stores do not want to be concerned about.

There are 67 Healthy Corners in D.C., which have sold more than 140,000 pieces of produce within the past 10 months. This is an increase from about 17,000 between September 2011 and April 2012. D.C. Central Kitchen is also willing to help other cities start similar programs; they have recently consulted in Rochester, New York.—Erin Lamb