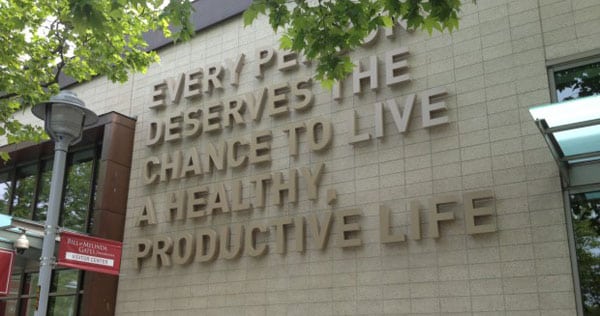 The Bill and Melinda Gates Foundation has invested $275 million in a new effort to strengthen its worldwide health mission. With this funding, the Bill and Melinda Gates Medical Research Institute “will combat diseases that disproportionately impact the poor in low- and middle-income countries by accelerating progress in translational science—the process that translates promising scientific discoveries into potential medical products.”

The new institute has been organized as one would a biotech firm that aims to move from laboratory discoveries to real-world cures. Unlike a for-profit concern, though, the backing of the Gates Foundation lets it ignore the commercial potential of the treatments it hopes will emerge.

Trevor Mundel, who runs the Gates Foundation’s global health operations, told Forbes Health, “The goal is to bring the advantages of industry into the public sector.” According to reporter Matthew Herper, Mundel really felt the weight of the matter when, working for the Swiss multinational pharmaceutical company Novartis, “he had dozens of people working on a drug for a rare disease but only five working on a new version of a malaria drug. Herper writes:

Pharmaceutical companies will do this work, but it will never be the core of their business; other nonprofit partners will always worry about where their funding is coming from. By taking on development…they will be able to act like a hungry drug company with success measured in lives saved, not dollars returned.

Dr. Penny Heaton, the Institute’s CEO, emphasized the power of the Foundation’s backing and strategy in an interview with STAT. “We don’t have to worry about revenue, return on investment. Our bottom line is lives saved. So, it’s a pretty exciting place to be.”

With this level of security, the Institute can focus on diseases whose economics are bad, with millions unable to pay for treatment at a level that would attract for-profit companies. Malaria, tuberculosis, and diarrhea kill millions annually, and new treatments require extensive, expensive testing to confirm they are effective and safe. Should the costs of this investment outweigh potential monetary return, for-profit pharmaceutical companies step back.

Until now, nonprofits and academic labs have not had the resources to fill the gap, meaning most new treatments from such organizations working in this area don’t reach the stage of getting tested on animals or being put in initial human studies. According to Dr. Heaton, the benefits of vaccine that would boost TB resistance in infants would be “enormous,” but “nobody else would run the human tests. These studies need to be done, but this is a very inexpensive vaccine, and there’s not a big market—there would be no incentive for a private partner to take on a study of this nature.”

According to Helen Branswell of STAT, the Institute wants to see results quickly. “Any products it passes on to commercial partners will come with strings attached—commitments that the products will be made available at affordable prices, in the needed volume, and within a specified time frame.”

NPQ has followed the trend of this current generation of mega-rich donors as it structures its philanthropy. This new Gates health initiative is consistent with an overall philosophy that allows the Gates family to work within a more traditional strategy, establishing a large foundation and encouraging others, through the Giving Pledge, to join them.

This contrasts with others like Mark Zuckerberg, who established the Chan Zuckerberg Initiative as an LLC in order to allow greater flexibility to invest in both nonprofit and for-profit ventures. CZI’s Biohub, unlike Gates’ MRI, specifically wanted to retain the commercial value of their discoveries. Biohub co-president and Stanford professor Stephen Quake told BuzzFeed News, “Some people feel that, for certain inventions, they need to have patent protection for those inventions to receive the investment and funding necessary to bring them to market and help people. And other people feel that their inventions are best disseminated by just giving them away for free.” CZI falls into the former camp.—Martin Levine