Gift to Princeton Historic in Terms of Price and Pricelessness 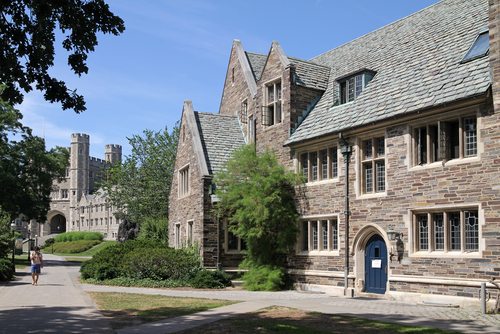 In what is the largest gift in the university’s history, Princeton University received a $300 million collection of rare books and manuscripts, including the 1455 Gutenberg Bible, the original printing of the Declaration of Independence, and the first printed works of William Shakespeare.

The collection comes from 1936 Princeton alumnus and philanthropist William Scheide, who died at the age of 100 last November and left the 2,500-piece collection known as Scheide Library to the university. The library has been part of the Firestone Library of Princeton Collection since 1959, when Scheide began transferring the collection from his home in Pennsylvania.

In addition to the first six printed editions of the Bible, beginning with the 1455 edition, the collection also includes an autograph by Beethoven circa 1815 in a music sketchbook, the famous First Folio (first printing) of Shakespeare’s plays accompanied by the second, third and fourth folios, a signed copy of Abraham Lincoln’s speech on slavery from 1856, and signed manuscripts from Mozart, Beethoven, Schubert, Bach, and Wagner, as well as original copies and telegrams from General Ulysses S. Grant during the Civil War.

From signed manuscripts from the Edwardian Age to artifacts from the pre-Civil War South, the collection is a true ride through history. As a “musician, musicologist, [and] bibliophile,” Scheide’s interests are well documented in the collection, as is his philanthropy. In addition to producing numerous University community concerts benefiting local organizations, Scheide was also the leading funder for the NAACP for the landmark 1954 case Brown v. Board of Education that desegregated the country’s public schools.

The collection has been gathered over the course of 150 years, beginning with Scheide’s grandfather back in 1865. Both Scheide’s father, also a Princeton alumnus, and Scheide himself continued building the collection and housed it in their home prior to eventually moving it. A major renovation of the Firestone Library will relocate the collection to a new space that was approved by Scheide before his death.

Of course, for a university housing such artifacts, the allure moves beyond the monetary value of the collection. As indicated by Karin Trainer, the University Librarian, the collection both supports and is supported by the university’s academic programs, given its immense research value. “There are discoveries to be made in every document and volume in the library,” she said. “This is a scholar’s library.” According to Trainer, the university is also in the process of digitizing the materials so others can access them through the university library’s website.

In a statement, Princeton President Christopher L. Eisgruber remarked that the gift represented “one of the greatest collections of rare books and manuscripts in the world today.”

“I cannot imagine a more marvelous collection to serve as the heart of our library.”—Shafaq Hasan