Girls Invited to Join in National BSA Jamboree. Why Now? 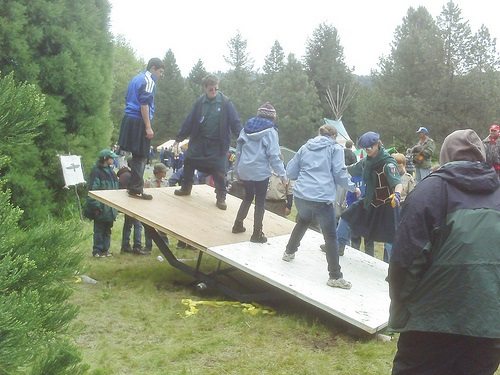 Just when you thought it was safe to go back to youth development, the Boy Scouts of America (BSA) are back in the headlines. This time, it’s to announce that hundreds of girls will be participating for the first time in the annual Jamboree, an intensive camping-like experience involving all manner of physical activity, including BMX, kayaking, climbing, etc. Girls at a Boy Scout event? Let’s look a little further.

The article in the Washington Post says that the girls who are eligible to attend are part of a program within scouting called Venturing. This is a specialty program designed for youths both male and female, ages 14 through 20, and is based on outdoorsy physical activity. Females have been involved in Venturing since it was created in the 1990s, and in scouting for more than 40 years (according to the BSA), but have not been invited to attend the Jamboree until now. (However, the American scouting movement is just catching up to international scouting—the World Scout Jamboree has previously welcomed female attendees.)

Heralded as groundbreaking, Venturing and its inclusion in the Jamboree “is designed to reach as many young adults—male and female—as possible, instead of just reaching out to a targeted group.” Understandably, many of the female participants in Venturing are very excited about the opportunity to show what they can do, and see if the boys can keep up.

At the risk of sounding cynical, it seems a little coincidental that the announcement of the girls’ participation in Jamboree comes so closely on the heels of the announcement that openly gay young men will be allowed to participate in scouting (until they turn 18 years old, that is, when they magically become persona non grata again). The recent decision has caused backlash from both sides. Having pleased no one, the Boy Scouts really need some good press, and the Washington Post’s report about the Jamboree is just the ticket. In addition, the decision to allow gay youth in the BSA followed years of pressure for the Boy Scouts to be more inclusive. Encouraging girls to participate in Jamboree is also an image of inclusiveness. The Boy Scouts needed to do something to bring interest back up in their program, and changing their image from being a closed, boys-only society that is openly homophobic to one that is encouraging of young people of all walks of life would make some marketing sense.

The coincidences surrounding this decision to include females in Jamboree date back a little further. The original decision was announced on July 13, 2012, with great hoopla on the Scouting website. As it happens, that joyful announcement of inclusion came at almost exactly the same time that the Boy Scouts of America reaffirmed its policy to exclude openly gay scouts and scout leaders, a story which NPQ reported on July 19, 2012.

All of this follows a decline in membership for scouting groups. In the past 10 years, BSA membership has declined by over 20 percent, from 3.3 million in 2002 to 2.6 million last year.

Concurrently, Girl Scouts of America (GSA) is competing to be the more ill of the two scout groups. NPQ first wrote about its consolidation plans in 2007, questioning what the effects would be. Though not necessarily an indicator of a wrong-headed strategy, the GSA currently has some 2.2 million youth members, a steep plunge from 2.8 million in 2003. GSA’s ledger is awash in a sea of red, as donations in 2011 were down nearly a third from 2007—$104 million and $148 million, respectively. Local GSA councils are fighting over the location of consolidated councils, and many in the GSA community rail against the sale of the traditional hallowed Girl Scout camps. The Venturing enterprise, too, has suffered attrition comparable to overall scout numbers; according to the BSA, Venturing membership has fallen over 10 percent from a high of 260,000 in 2008. It’s enough to say that the grass is pale and yellow on both sides. Is the BSA attempting to make hay when the sun shines, in the form of girls who deeply value the outdoors aspect of scouting? Are we imagining that these coincidences have any meaning?

BSA National Jamboree leader Larry Pritchard said recently that the invitation to Girl Scouts to attend their quadrennial Olympiad-like event is “just the next logical step for us to take, to give those members of our program an opportunity to enjoy what we have here as well, to drink the Kool-Aid and spread the word to the others who are in Venturing, to both young men and young women.” Drink the Kool-Aid­? That’s a very dark, deep, and pathetic statement of undiluted irony—remember the Jonestown Massacre, 34 years ago?—for two youth organizations facing declining numbers.

Is this magnanimous sleight-of-hand meant to divert public indignation over the Boy Scouts’ half-hearted move to allow openly gay scouts, but bar them from adult leadership posts? What, in your opinion, is going on in scouting?—Rob Meiksins and Louis Altman