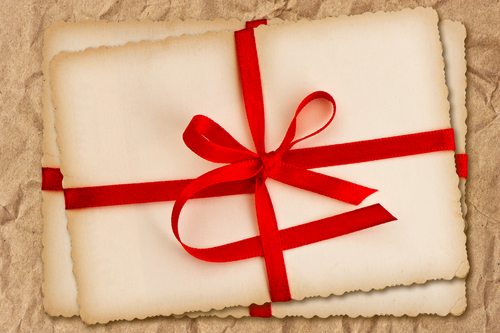 A research study documented in the Journal of Economic Psychology, “The counterintuitive effects of thank-you gifts on charitable giving,” suggests that offering gifts in return for donations can negatively affect your fundraising by interrupting the altruistic motivation of the potential donor. As can be seen below, the size of donations actually declines if you offer a gift that is conditionally based on donating. 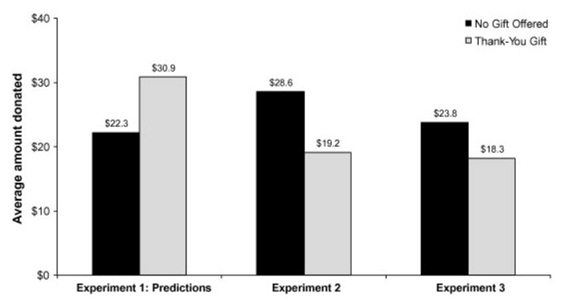 According to the study, “Results indicate that although people expect that the offer of thank-you gifts will increase donations, such offers actually reduce charitable donations. This effect was obtained across a wide variety of charities and gifts types, regardless of whether the donations were hypothetical or real, the gift was desirable or undesirable, the charity was familiar or unfamiliar, or the gift was more or less valuable. Moreover, such patterns cannot solely be explained in terms of inferences about the charity’s quality (e.g., either their efficacy or current wealth), the undesirability of the gift itself, or simple anchoring effects.”

The researchers, George Newman and Jeremy Shen, both of Yale, find that the odd reduction in fundraising receipts when a gift is offered was the result of a “crowding out” of altruism by selfishness. This cut the average gift size in the experiments they conducted.

The study also suggests that there are ways you may be able to avoid this problem. For instance, they found that reframing the gift—as in, this cup has our logo on it and that helps our profile —does bring gift size back up to the level of those who are not offered gifts (but it does not increase the size of donations). On the other hand, there is some research that suggests that offering an unconditional gift as the ask is made—as in, here are these address labels and we’d love your money for the great work we do—does boost donations.

There is also some indication that greater value (within reason) in that original unconditional gift may trigger a larger boost. A study [PDF] by German researcher Armin Falk found that the inclusion of a postcard increased giving by 17 percent, while including four postcards and envelopes boosted donations by more than 75 percent in comparison to those who did not get gifts.