Glenn Beck and Sarah Palin Square Off over Immigrant Kids 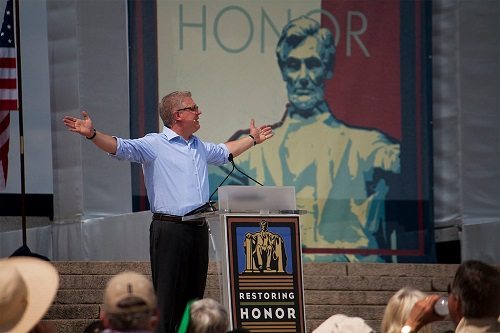 It’s an odd tale of two very ideologically conservative icons coming down on very different sides of the crisis of unaccompanied immigrant children flowing into the United States. Radio and television personality Glenn Beck and former Alaska governor and vice presidential candidate Sarah Palin have come out diametrically opposed to each other on what the nation should do to help—or not help—these children.

The mainstream press, or as she would call it, the “lamestream” press, doesn’t pay much attention to Palin any more, but she is frequently quoted in outlets like the Breitbart News and conservative newspapers such as the Anschutz-owned Washington Examiner. In a speech to the Western Conservative Summit, Palin described current immigration policies as turning America into an “unfunded charity” for “illegals” drawn to the U.S. by “DREAMweaver” Obama. According to Tony Lee in the Breitbart News, “Palin said that the ‘forgotten man’ who cannot catch a break will now see their tax dollars go to help take care of illegal immigrants while they are forced to compete with them for shrinking resources and jobs.”

In another article, Lee cited Palin’s contention that the Obama “administration was not dumping illegal immigrant children in exclusive liberal communities in Manhattan, Silicon Valley, and the Washington, D.C. suburbs to live with pro-amnesty advocates.” Lee headlined his article that Palin was concerned that the undocumented children were not being sent to Mark Zuckerberg’s neighborhood. Zuckerberg has been an active proponent of immigration reform, though primarily for immigrants with technical skills needed by the tech industry.

Palin doesn’t seem to have much empathy for the children, at least in her public statements. She was highly critical of House minority leader Nancy Pelosi, who late last month said of the immigrant children, “Every child, every person, has a spark of divinity in them and is therefore worthy of respect…[because] we are all God’s children.” Palin responded that Pelosi is “either speaking such gibberish, considering her track record, or she’s confessing one heck of a great conversion.”

It doesn’t appear that Palin is going to be a leader of initiatives to help the unaccompanied children coming from Central America. Glenn Beck, however, is taking a very different position. This past weekend, he made a visit to McAllen, Texas as part of his Mercury One charity to take truckloads of teddy bears and soccer balls for the immigrant children detained there. Describing the children as “caught in the political crossfire” due to “no fault of their own,” Beck told his radio listeners, “my brain is with the law…[but] my heart is with anyone who is suffering.” Beck will be partnering with churches along the border to provide food, money, and toys to the immigrants.

A talented media manipulator like few others, Beck knows that his announcement of compassion and assistance for the immigrant children is going to earn him little or no support among his far right-wing audience. He acknowledged that his plan to assist the immigrant children is “a position more deadly to [his] career” than anything else he has ever done and has already resulted in subscriptions and donations to his program decreasing.

Nonetheless, Beck has given his spurt of compassionate conservatism a political twist. He complained that his aid distribution effort has been joined by Senator Ted Cruz (R-TX), but the mainstream press won’t cover Cruz’s role because it prefers to paint Cruz as a “hater.” “They cannot cover Ted Cruz going down to the border,” Beck said. “This gives Ted Cruz the ammo to be tough on immigration, to be tough on justice. Once you have mercy established, you have credibility to talk about justice.” The showman in Beck made sure that his show on the border included media-attractive events, such as his grilling chicken for the immigrant kids.

For his efforts, Beck has been slammed by other conservative media stars and declared a “huckster” by Michael Savage. Fox News commentator Greta van Susteren described Beck’s complaint about the lack of coverage he and Cruz have received as “nutty,” noting that bigger stories such as the downing of Malaysian Airlines flight 17 by Ukrainian separatists supported by Putin’s Russia and the Israeli invasion of Gaza might have been more logical reasons for the limited press attention he received. “Glenn is really off the charts on this accusation about us not covering the border,” Van Susteren said.

Nonetheless, despite criticism from his ideological peers like Savage and negative impacts for his network, Beck is undaunted. “Please would you consider doing the hard thing as well would you resist the temptation to flee or break up your family, please don’t hand your child off to a smuggler in the middle of the night,” Beck said. “I can’t sleep at night thinking about your son or daughter and so I and about 150 volunteers and multiple semi-trucks are going down to our border and we will see your child…and we will care for them.”—Rick Cohen