Good Work, Occupy Sandy. But We Can’t Be Seen with You. 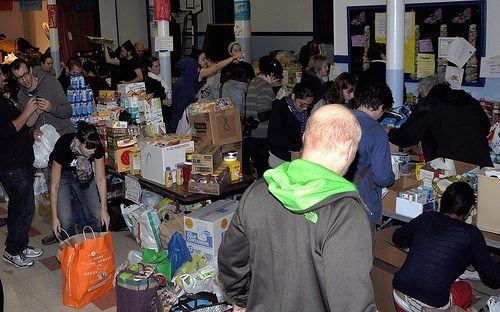 In an op-ed published as a blog by Forbes, Gary Shapiro, the president and CEO of the Consumer Electronics Association (CEA), a trade association, said that he received some “pushback” from members and colleagues in regards to a proposal for CEA to make a contribution to the American Red Cross to help victims of Superstorm Sandy. Where did the pushback come from? Maybe it was because the ARC was seen by some as so slow in responding to Sandy that the Staten Island borough president told the public not to donate to the Red Cross out of frustration. Maybe it was because of frequent questions about Red Cross financial transparency. But in addition, some people apparently felt that it would have been better for the CEA to give to the Occupy Sandy effort.

Like the CEA’s pushback critics, Shapiro acknowledged that Occupy Sandy activists “responded quickly and mobilized many volunteers to areas affected by the storm… going into houses and helping clean, comfort and assist in any way they could.” They actually got things done for the people of Long Island and Staten Island.

The Occupy people were certainly on-site fast and getting things done, Shapiro contended, but they weren’t efficient. “While the Red Cross may have been slower to mobilize and respond,” he said, “it was certainly more organized and effective.” As evidence, he cited the conclusion of American Red Cross CEO Gail McGovern, who described her organization’s performance in response to Sandy as “flawless.” “(T)he Occupy movement rejects organized hierarchy,” Shapiro observed, “through which people can be assigned various helpful functions.” The problem, according to Shapiro, was that “Occupy Sandy…lacks oversight, accountability or structure.”

There is always lots of commentary about the American Red Cross (ARC) during a disaster, ranging from the overly hagiographic to the bitterly censorious. This commentary from Shapiro is one for the books. He wrote, “The bottom line is that for an organization like CEA – which represents 2,000 corporations and even more personal political interests – there is no way we can make a contribution to anything related to the political mission of the Occupy movement,” Shapiro concluded. He is thankful for the good efforts of the Occupy Sandy people, but his association can’t support them because of, well…it seems…we guess, because…maybe they believe things that the corporate world doesn’t. It’s okay if some non-hierarchically minded Occupy Sandy person helps people suffering from the devastation of Superstorm Sandy, but the corporate world doesn’t want to have any possible association with the Occupy people—because they’re Occupy people.

Is that enough of an explanation for you? It looks like it is for Gary Shapiro.—Rick Cohen